Beacons in the Darkness: Hope and Transformation Among America's Community Newspapers (Paperback) 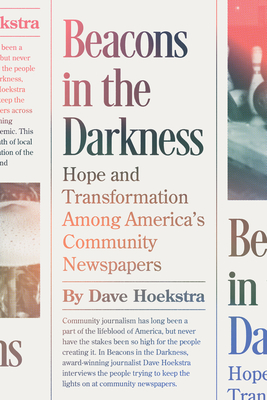 Beacons in the Darkness: Hope and Transformation Among America's Community Newspapers (Paperback)

Community journalism has long been a part of the lifeblood of America, but never have the stakes been so high for the people behind it.

In Beacons in the Darkness, award-winning journalist Dave Hoekstra interviews the people trying to keep the lights on at community newspapers across the country amid buyouts, declining revenues, fake news, and a pandemic. This book is not another account of the death of local journalism--but rather a celebration of the community ties, perseverance, and empathy that's demonstrated in community newsrooms from Hillsboro, Illinois, to Charleston, South Carolina, to Marfa, Texas.

Hoekstra recounts the sometimes-scandalous but always-industrious stories of the families who built these newspapers and passed them down through generations. Modern publishers and owners describe in their own words their struggles and experiments to stay alive in the digital age, not just for their businesses and their families but also for the communities they serve and the neighbors whose stories they tell in their reporting. Beacons in the Darkness provides an intimate view inside the organizations that still publish photos of the local bowling league and the outlandishly large mushrooms on the edge of town, leaving you with a rekindled fondness for your own community paper--and a renewed appreciation of what we all stand to lose without one.

Dave Hoekstra is a Chicago author-journalist. From 1985 through 2014, he was a columnist-critic at the Chicago Sun-Times, where he won the 2013 Studs Terkel Community Media Award. He has contributed pieces to Chicago Magazine, the Chicago Reader, New City, and Raw Vision.He has written several books, including The Supper Club Book (A Celebration of a Midwest Tradition), The People's Place (Soul Food Restaurants and Reminiscences from The Civil Rights Era to Today), and The Camper Book (Celebration of a Moveable American Dream). Dave wrote and co-produced the WTTW-Channel 11 PBS special, "The Staple Singers and the Civil Rights Movement," nominated for a 2001-02 Chicago Emmy for Outstanding Achievement for a Documentary Program--Cultural Significance. He also wrote and co-produced the award-winning 2018 full-length documentary and companion book The Center of Nowhere (The Spirit and Sounds of Springfield, Missouri).