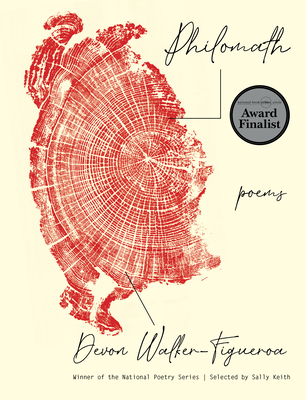 Sensual and sacred desires surge through these gritty, expressive poems. They are often long, meandering through memory and clinging to the clarity of strong details. From the secrets of ghost towns, mysteries of ancestry, to meditations on innocence and death, the words return to the bodies we find ourselves in, the places we are from and formed.

Selected by Sally Keith as a winner of the 2020 National Poetry Series, this debut collection is a ruminative catalogue of overgrowth and the places that haunt us. With Devon Walker-Figueroa as our Virgil, we begin in the collection's eponymous town of Philomath, Oregon. We drift through the general store, into the Nazarene Church, past people plucking at the brambles of a place that won't let them go. We move beyond the town into fields and farmland--and further still, along highways, into a cursed Californian town, a museum in Florence. We wander with a kind of animal logic, like a beast with "a mind to get loose / from a valley fallowing / towards foul," through the tense, overlapping space between movement and stillness. An explorer at the edge of the sublime, Walker-Figueroa writes in quiet awe of nature, of memory, and of a beauty that is "merely existence carrying on and carrying on." In her wanderings, she guides readers toward a kind of witness that doesn't flinch from the bleak or bizarre: A vineyard engulfed in flames is reclaimed by the fields. A sow smothers its young, then bears more. A neighbor chews locusts in his yard. For in Philomath, it is the poet's (sometimes reluctant) obligation "to keep an eye / on what is left" of the people and places that have impacted us. And there is always something left, whether it is the smell of burnt grapes, a twelfth-century bronze, or even a lock of hair.

Devon Walker-Figueroa is the author of Philomath, selected for the 2020 National Poetry Series by Sally Keith. Originally from Kings Valley, a ghost town in the Oregon Coast Range, she is a graduate of the Iowa Writers' Workshop and the 2018 recipient of the New England Review's Emerging Writer Award. Her poems have appeared in such publications as The Nation, POETRY, the American Poetry Review, Lana Turner, and Ploughshares.