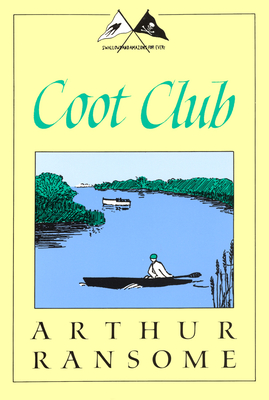 By Arthur Ransome
$14.95
Availability to be confirmed

This is book number 5 in the Swallows and Amazons series.

Someone is wrecking wild birds' nesting places on the lake and selling eggs to out-of-town collectors. It's the Coot Club Bird Protection Society to the rescue

Dick and Dorothea Callum came to the Norfolk Broads during the Easter holidays, eager to learn to sail. There, they run into the Coot Club--children who protect the local birds from thoughtless tourists. Trouble begins when a coot's nest is disturbed by a ship full of "Hullabaloos"--rude holiday boaters. The children try to convince the "Hullabaloos" to moor their noisy boat somewhere else. This fails and frantic chases, calamitous boat collisions, daring rescues (including by a dog, William the pug), and rewards ensue Friendship and resourcefulness, dangers and excitement: Arthur Ransome's Swallows and Amazons series has stood the test of time. More than just great stories, each one celebrates independence and initiative with a colorful, large cast of characters. Coot Club (originally published in 1934) was ahead of its time in its concern for protecting wildlife. It is the fifth title in the Swallows and Amazons series, books for children or grownups, anyone captivated by a world of adventure, exploration, and imagination.

ARTHUR RANSOME was born in Leeds in 1884. He had an adventurous life -- as a baby he was carried by his father to the top of the Old Man of Coniston, a peak that is 2,276ft high! He went to Russia in 1913 to study folklore and in 1914, at the start of World War I he became a foreign correspondent for the "Daily News." In 1917 when the Russian Revolution began he became a journalist and was a special correspondent of the "Guardian." He played chess with Lenin and married Trotsky's personal secretary, Evgenia Petrovna Shelepina. On their return to England, he bought a cottage near Windermere in the Lake District and began writing children's stories. He published the first of his children's classics, the twelve "Swallows and Amazons "books, in 1930. In 1936 he won the first ever Carnegie Medal for his book, "Pigeon Post." He died in 1967.