Dog Butts and Love. And Stuff Like That. And Cats. (Jim Benton cartoons) (Paperback) 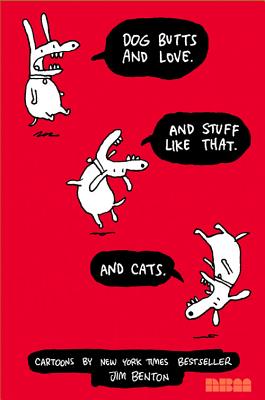 Dog Butts and Love. And Stuff Like That. And Cats. (Jim Benton cartoons) (Paperback)

Bestselling cartoonist Jim Benton of It’s Happy Bunny and Dear Dumb Diary fame has also been posting whimsical, dry-humored, and at-times nasty cartoons on Reddit.com, where nearly half of the top-100 cartoons on the “Cartoons” subreddit are his. Now, for the first time, these cartoons have been gathered into a single book. From wry observations about the absurdities of life and acerbic comments to poetic musings, from cats and dogs to humans, and from one style to another, this compendium will astound readers as it exposes them to the breadth of Benton’s seemingly inexhaustible talent for humor.

Benton began his career in a t-shirt shop where he started designing his own characters on T-shirts, which launched a career in licensing and the creation of characters like It's Happy Bunny, a property that has generated over 3/4 of a billion dollars at retail, won three Addy Awards, and five top LIMA licensing awards.

People Magazine named him "one of the most visible cartoonists in America." and The Wall Street Journal said "Mr. Benton's intellectual properties. . .have made him stand out in an industry dominated by big entertainment companies." Publishers Weekly remarked simply: "Who could resist [Jim Benton]?"

He created an animated series called The Secret Files of the SpyDogs for FoxKids, he is the creator, author and artist of the Franny K. Stein series of books, as well as the New York Times bestselling Dear Dumb Diary series, which was made into a made-for-tv musical which Benton produced and co-wrote. He is also the recipient of a National Cartoonist Society Reuben divisional award.

Dog Butts and Love. And Stuff Like That. And Cats. is the first collection of his web cartoons.

"Consistently brilliant, always hilarious, Jim Benton is one of the best cartoonists on the web right now."  — Matthew Inman, TheOatmeal.com

"If laughter is the best medicine, then your insurance company should reimburse you for the cost of this book."  —Jerry Zucker, director, Airplane!, Top Secret!, and other films

“It was marvelously entertaining, because Benton is obviously insane, or insanely creative. Not two gags were very much alike, and tone and subject matter ranged from light-hearted ‘The Far Side’ kind of stuff, to the black humor of Charles Addams’ ‘The Addams Family,’ and everywhere in between. ‘Dog Butts’ turned out to be genuinely original and very entertaining.” —Chicago Tribune

“Easy to pick up but hard to put down...Pick up a copy of this hilarious new book, you won’t be disappointed!” —PopCulturez.com

“Twisted, brutally honest and laugh out loud comics…this book is the perfect gift for someone who needs to lighten up! Well recommended.” —Joseph's Reviews

"Essentially, if you or your recipient like books that make you want to photograph and tweet every page, you should buy this." —Holly Brockwell, gadgette.com