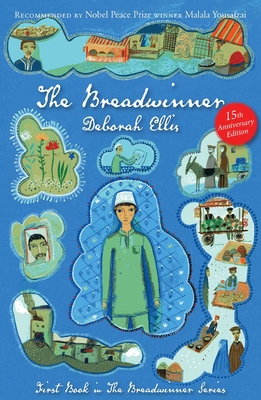 This is book number 1 in the Breadwinner series.

The first book in Deborah Ellis's riveting Breadwinner series is an award-winning novel about loyalty, survival, families and friendship under extraordinary circumstances during the Taliban's rule in Afghanistan in the late 1990s.

Eleven-year-old Parvana lives with her family in one room of a bombed-out apartment building in Kabul, Afghanistan's capital city. Parvana's father -- a history teacher until his school was bombed and his health destroyed -- works from a blanket on the ground in the marketplace, reading letters for people who cannot read or write. One day, he is arrested for the crime of having a foreign education, and the family is left without someone who can earn money or even shop for food.

As conditions for the family grow desperate, only one solution emerges. Forbidden to earn money as a girl, Parvana must transform herself into a boy, and become the breadwinner.

The fifteenth anniversary edition includes a special foreword by Deborah Ellis as well as a new map, an updated author's note and a glossary to provide young readers with background and context. All royalties from the sale of this book will go to Canadian Women for Women in Afghanistan. Parvana's Fund supports education projects for Afghan women and children.

CCSS.ELA-LITERACY.RL.5.3
Compare and contrast two or more characters, settings, or events in a story or drama, drawing on specific details in the text (e.g., how characters interact).

CCSS.ELA-LITERACY.RL.6.3
Describe how a particular story's or drama's plot unfolds in a series of episodes as well as how the characters respond or change as the plot moves toward a resolution.

Deborah Ellis, best known for her Breadwinner series, has donated more than $1 million in royalties to Canadian Women for Women in Afghanistan and Street Kids International. She has won many awards, including the Governor General's Award and Sweden's Peter Pan Prize.