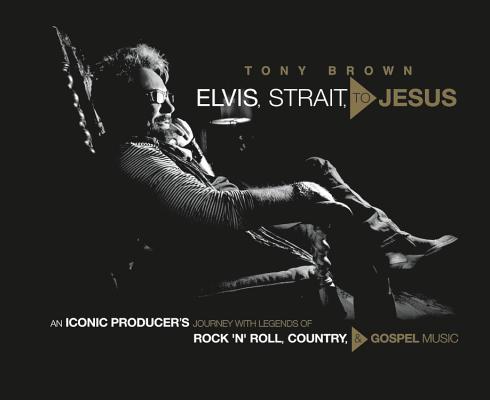 
Availability to be confirmed
"In the world of modern country music history, Tony Brown has earned a critical spot...[as] one of the top creative minds of the past four decades." -- Billboard.com

This striking photographic journey shows how Tony Brown became the King of Nashville: from pianist for Elvis Presley, to president of MCA Records Nashville, to producer of over 100 number-one country songs that are beloved by millions. Elvis, Strait, to Jesus celebrates a music icon's legendary rise, his history-making industry relationships, and how these friendships gave us the songs we still live by.
The magic of Tony Brown's forty-year career is revealed in pictures, with historical and behind-the-scenes images, snapshots from the "Elvis years," and stylish contemporary portraits staged in a French Renaissance chair of friends, musicians, and artists including:

Tony's fascinating anecdotes accompanying the photos unveil the encounters that led to mega-hits by George Strait, Reba McEntire, Trisha Yearwood, and countless others; he recounts how he became the accidental founder of Americana music with the edgy signings of Steve Earle and Lyle Lovett to MCA, as well as his unforgettable memories of life on tour with Elvis Presley. He also retraces his North Carolina roots and honors the legends of rock, country, and gospel with whom he forged an inimitable music legacy. This special tribute is one that no fan of music or artistic photography should be without.
Tony Brown is the iconic music producer with over 100 million record sales and over 100 number one singles to his credit. From humble Carolina roots as a child pianist in his family band, to backing Elvis Presley on keys, to producing multiple hits for Reba McEntire, George Strait, Trisha Yearwood, and others, Tony's 40-year career has marked musical history like no other.

As President of MCA Nashville for two decades and co-founder of Universal South Records, Tony has tremendously impacted countless artists' careers and the American cannon of music in multiple genres. He has worked with acts like Lyle Lovett, Steve Earle, Wynonna Judd, Willie Nelson, Chris Stapleton, Tim McGraw, Blake Shelton, Little Big Town, Brooks & Dunn, Cyndi Lauper, Lionel Richie, Dave Grohl, and more.
"Tony Brown is going to leave a big footprint in the music world when he decides to step away. I love the fact that he's been such a huge part of my history."—George Strait

"In the world of modern country music history, Tony Brown has earned a critical spot...[as] one of the top creative minds of the past four decades."—Billboard.com

"Tony has a place in music history, and in the hearts who've worked with him and loved him, that is uniquely his own."
—Rosanne Cash