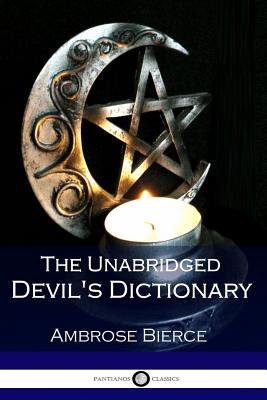 By Ambrose Bierce
$9.98
Usually Ships in 1-5 Days
This book cannot be returned

Ambrose Bierce's classic collection of witty and satirical asides, arranged alphabetically as a dictionary, is presented here in full.
Known as a hero for his actions in the American Civil War, Bierce distinguished himself later in life as a barbed commentator who would turn his ire to all sorts of topics. Today, most of his journalism and opinion pieces are consigned to obscurity. Lasting fame however was gained from the Devil's Dictionary; wherein Bierce redefines popular terms in a deeply sardonic, even bitter, manner.
Bierce had a painful experience fighting, where he lay wounded for hours upon a hellish battlefield. He watched men slaughter one another like animals, and this horrific experience changed his outlook forever: Bierce viewed mankind and life through a cynical lens, and it was this outlook that lost him many friends. He achieved final notoriety when, in 1913, he disappeared without trace and was never found.
The Devil's Dictionary is, as the title suggests, full of dark and devilish humor. For instance, it describes the Adam's Apple as a "protuberance on the throat of a man, thoughtfully provided by Nature to keep the rope in place." and marriage as a "state of temporary insanity only cured by the passage of time."
Such brief, cutting asides are perfect for occasional reference, when one is in the mood for dark wit. Underpinned by brevity and a keen sense of the ironic, this book is a satiric masterwork and a perfect introduction to the author. Few of the definitions feel dated or rooted in their time: Bierce composed his satirical dictionary over decades in the late-19th and early 20th century. Later writers such as H. L. Mencken admired and took inspiration from Bierce's many barbs, and he remains admired to this day.