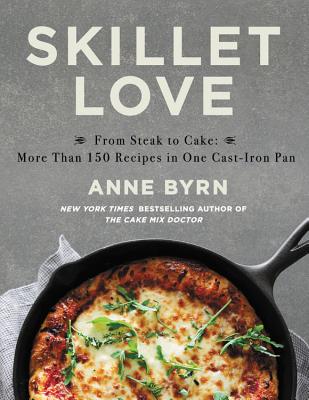 
On Our Shelves Now
A delicious celebration of the cast iron pan--by the mega-bestselling author of THE CAKE MIX DOCTOR.

Beloved by home cooks and professionals alike, the cast iron skillet is one of the most versatile pieces of equipment in your kitchen arsenal. Perfect for every meal of the day, the cast iron pan can be used to cook eggs, sear meat, roast whole dinners, and serve up dessert warm from the oven.

Bestselling author Anne Byrn has carefully curated 160 recipes to be made in one simple 12-inch cast iron skillet. These are dishes everyone can enjoy, from appetizers and breads like Easy Garlic Skillet knots to side dishes like Last-Minute Scalloped Potatoes, from brunch favorites to one-pot suppers like Skillet Eggplant Parmesan. And of course, no Anne Byrn cookbook would be complete without her innovative cakes like Georgia Burnt Caramel Cake, cookies like Brown Sugar Skillet Blondies, and pies and other delicious treats.

Scattered throughout are fun tidbits about the origin of the cast iron skillet and how to properly season and care for them. Anne Byrn has crafted an informational, adaptable, and deliciously indispensable guide to skillet recipes the whole family is sure to love.

Anne Byrn is a bestselling food writer and author based in Nashville, Tennessee. Her most recent books are AMERICAN CAKE (Rodale, 2016) and AMERICAN BITES (Rodale 2018). Byrn's previous books include the New York Times bestselling THE CAKE MIX DOCTOR and its sequels. These cookbooks have nearly 4 million copies in print. USA Today called THE CAKE MIX DOCTOR the bestselling cookbook of 2000, and it was recently named No. 18 on Southern Living's list of the 100 most important cookbooks of our time. Byrn is a regular contributor to Food52, the Southern Kitchen, and the podcast, Stuff You Missed in History Class, and has been featured in People magazine, The Washington Post, The New York Times, Los Angeles Times,Southern Living, and many other publications. She has appeared on Good Morning America, Later Today, CNN, The Food Network and QVC and has taught cooking classes across the country.
"Byrn (The Cake Mix Doctor) salutes the cast-iron skillet in this eye-opening and tasty collection. Calling it "the only pan you'll ever need," Byrn offers instructions for using it to sear, caramelize, roast, and bake. She presents a top-notch variety of recipes for small plates, salads, and vegetables, such as potato-onion latkes with cucumber raita; peppers stuffed with quinoa, raisins, green olives, and zucchini; and pan-roasted beets with spinach, cherries, and candied pecans . . . Where Byrn really shines is in her chapters on desserts and breads, biscuits, and buns, where she showcases appealing items not traditionally made in a skillet: pound cake, a cranberry and almond tart, Irish soda bread with drunk raisins, and skillet Yorkshire pudding. For those looking to learn about cast-iron skillet cooking, Byrn is an astute teacher, and this collection showcases new and appealing ways to create delicious meals using a kitchen mainstay."—Publishers Weekly