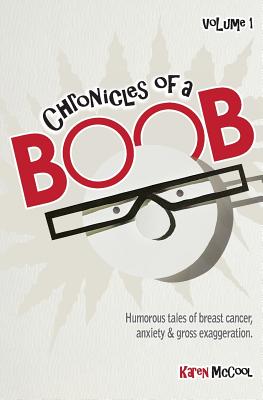 Chronicles of a Boob, Vol. 1, is the best psychological thriller of 2016, according to people who don't know the difference between a psychological thriller and a humorous memoir about breast cancer, anxiety, and gross exaggeration. Volume 1, hailed as a literary triumph by absolutely no one, is the first in what is destined to be a sprawling one-volume series.

Written in exquisite, razor-sharp prose using words, Chronicles of a Boob documents one woman's courageous (not really) journey through not actually (well, maybe a little) having breast cancer and, ultimately, confronting her own mortality. Karen doesn't always laugh in the face of death, but when she does, she ...

Okay she never does. But sometimes she guffaws at it from a safe distance while cowering under a blanket and sipping her third martini.

Wait, what? Let's try this again.

Karen's story tells the shocking truth about how it's far worse to feel anxiety about having breast cancer than it is to actually have it.

Cheesus, Karen That's not true It's much, much worse to have breast cancer What's wrong with you?

The point is this: no one really knows what this book is about, but we can say that you probably shouldn't read it if you're offended easily. Or difficultily. Or if you don't like it when writers make up words.

So if you're outraged after seeing a nipple drawing on the book cover, Chronicles of a Boob isn't for you. (A nipple wearing glasses is the least offensive thing in the book. F-bombs are dropped occasionally or, as some might say, all the time.)

If, however, you're so prone to anxiety that you worry you might get cancer merely by seeing the word "cancer" in print, Chronicles of a Boob is a must-read (following treatment for your anxiety disorder).