The Queen in the Cave (Hardcover) 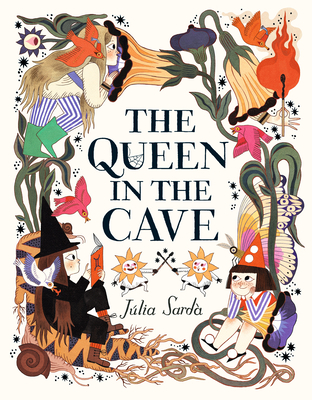 The Queen in the Cave (Hardcover)

In this gorgeously illustrated book, three sisters journey into the forest to search for the witch queen of their dreams. What they end up finding is quite surprising!

— Aly
In her debut as author-illustrator, Júlia Sardà spins an enthralling and evocative tale, rich with layers of meaning to be discovered.

One night, Franca has a dream about a marvelous queen who lives in a dark cave, deep in the forest. She cannot sit still until she knows if her dream is true. So with her younger sisters, Carmela and Tomasina, Franca ventures into the forest at the end of their garden. As they travel deeper through nettles and thickets, drawing closer and closer to the cave, the world shifts, and everything shrinks and expands at the same time. Here, they meet beasts and creatures that shock and delight them, and they escape horrible things that frighten them. They learn to be brave, to be bold, to face their darkest fears. And what of the queen? Well, what they find in the cave is perhaps the most unexpected thing of all . . . In Júlia Sardà’s irresistible, mysterious modern fairy tale, each spread is a stunning and wildly imaginative set piece brought to life in sumptuous color and detail.
Júlia Sardà is a Spanish artist who has illustrated many books for children, including Mary Who Wrote Frankenstein by Linda Bailey, The Liszts by Kyo Maclear, The Wolf's Secret by Nicolas Digard and Myriam Dahman, and a number of classics, including Alice’s Adventures in Wonderland, The Wonderful Wizard of Oz, and Charlie and the Chocolate Factory. The Queen in the Cave is the first book she has both written and illustrated. Júlia Sardà lives in Barcelona.
Three sisters sneak out for a nighttime adventure in Sardà’s fantastical picture book, which taps into the wonderous imagination of childhood and hints at what lies beyond. . . . Sardà unleashes a phantasmagoric blend of beauty and eeriness in her intricate, antique-hued illustrations. . . supremely exciting. . . . An unforgettable story that will leave readers with their eyes wide open.
—Booklist (starred review)

The “wonders [are] infinite” in this surreal early reader. . . . The eye-catching illustrations feature colorful geometric objects, bright and patterned creatures, and big-eyed children whose movements are stiff, goofy, and evocative as they dare to “go where no one has ever gone before!”
—Foreword Reviews

A beautifully illustrated longform picture book that explores the unease and bravery that comes with growing up.
—School Library Connection

Mystical and sumptuously illustrated. . .a strange and beautiful story for children ages 5-9.
—The Wall Street Journal