Ducks Overboard!: A True Story of Plastic in Our Oceans (Hardcover) 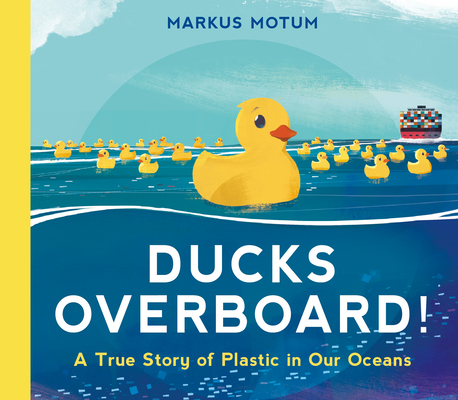 Ducks Overboard!: A True Story of Plastic in Our Oceans (Hardcover)


Special Order - Usually Arrives in 1-5 Days
Eco facts come to light as a plastic duck narrates this beautifully illustrated true story of thousands of bath toys that were lost at sea and swept to the four corners of the Pacific.

If a shipping container filled with 28,000 plastic ducks spilled into the Pacific Ocean, where would all those ducks go? Inspired by a real incident, this captivating and innovative look at the pollution crisis in our oceans follows one of the ducks as it is washed away on ocean currents, encountering plastic-endangered whales and sea turtles and passing through the giant floating island of marine debris known as the Great Pacific Garbage Patch. From the author-illustrator of the acclaimed Curiosity: The Story of a Mars Rover comes a highly accessible and graphically stylish picture book with an ultimately hopeful message about environmental issues and the state of our oceans. An end map documents the widely scattered journey of the real-life plastic ducks, showing where they have been found, as well as facts about the ways plastic is affecting various parts of the world.
Markus Motum is the author-illustrator of Curiosity: The Story of a Mars Rover, his debut book for children. He studied illustration at the University for the Creative Arts in England, where he rediscovered his love of picture books. He lives in Brighton, England.
The author goes for a broad view in both wide-angled illustrations of litter floating or washed ashore and in adding notes about ocean currents, the value as well as hazards of plastics, and other related topics to his urgent message that our oceans are in trouble. A set of activities and organizations at the end adds fresh incentive for young recyclers and eco-activists to get off the stick. . . . An awesome odyssey that also makes a telling point, both worthy of repeated iterations.
—Kirkus Reviews

As in his 2018 title Curiosity: The Story of a Mars Rover, Motum smartly employs a whimsical character introducing solid scientific concepts, a task this book’s child friendly star (Rubber Duckie, you’re the one!) performs swimmingly.
—The Horn Book

Hopeful. . . the book itself ends with facts about ocean currents, plastic waste and how people can help.
—The Virginian Pilot