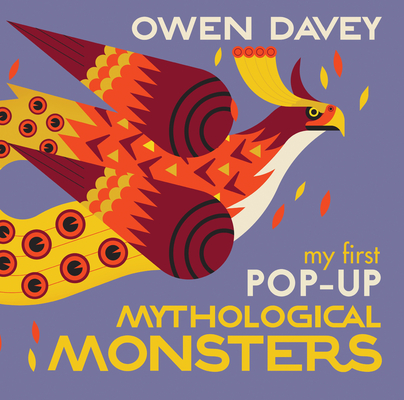 
On Our Shelves Now
Mythological monsters from around the world spring to life in a striking follow-up to My First Pop-Up Dinosaurs.

The fearsome ushi-oni haunts the coast of Japan. Greece’s three-headed Cerberus stands guard at the gates of Hades. Scandinavia’s huge, wolflike Fenrir devours everyone in its path. Open the pages of this first pop-up book and unleash fifteen incredible monsters . . . if you dare. From the award-winning creator of My First Pop-Up Dinosaurs comes a second pop-up treasury featuring everything from North America’s peculiar jackalope to the brilliant, luck-bearing Sarimanok of the Philippines, from the fiercely majestic griffin of Egypt to the spellbinding firebird of Russia. Owen Davey's stylized illustrations, with their crisp patterns and bold shapes, make this exploration of mythological monsters an enchanting adventure for anyone who loves the fantastical.
Owen Davey is an award-winning illustrator who works with traditional and digital media to create retro-inspired illustrations. His work has been published worldwide, and he has been nominated for the Kate Greenaway Medal twice. Owen Davey lives in London.