Colossus: The World’s Most Amazing Feats of Engineering (Hardcover) 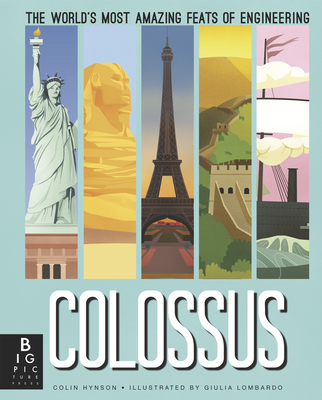 Colossus: The World’s Most Amazing Feats of Engineering (Hardcover)


Special Order - Usually Arrives in 1-5 Days
Colossus explores some of the greatest feats of engineering in history, from ancient pyramids to enormous bridges to towering skyscrapers.

Have you ever wondered how it’s possible for the tallest buildings in the world to stay standing through the most severe earthquakes? Or how a prehistoric civilization managed to build something as impressive as Stonehenge? Discover the engineering that has led to the most innovative buildings, bridges, and monuments on the planet, from towering skyscrapers to energy-creating dams to underground tunnels miles long. Learn how people have historically turned to engineering to build higher, farther, faster, and greener into the future.
Colin Hynson worked in museum and heritage education, including the Science Museum in London, before becoming a children’s and educational writer. He has written more than thirty nonfiction books for young people. He has also been a scriptwriter, appeared on radio and television, and written for the Guardian, the Times Educational Supplement, BBC History magazine, and various computing magazines.

Giulia Lombardo is a children’s illustrator who studied entertainment design at the Nemo Academy of Digital Arts in Italy. She has illustrated many different subjects, but she especially loves to draw buildings, cities, and architecture. She works surrounded by cats, dogs, rabbits, and a chicken in her home in Florence, Italy.