Because of Winn-Dixie Anniversary Edition (Hardcover) 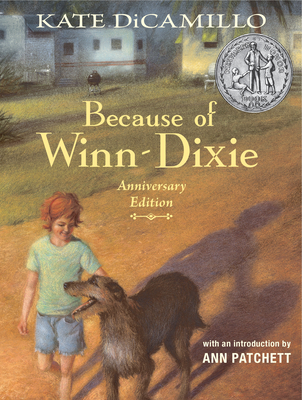 Because of Winn-Dixie Anniversary Edition (Hardcover)

By Kate DiCamillo
List Price: $19.99
Our Price: $18.99
(Save: $1.00 5%)
On Our Shelves Now
Revisit Kate DiCamillo’s beloved first novel with a beautiful twentieth-anniversary edition featuring an introduction by Ann Patchett.

“This book is (I hope) a hymn of praise to dogs, friendship, and the South,” Kate DiCamillo said of her best-selling debut novel, which has been awarded a Newbery Honor, translated into nearly thirty languages, and turned into a major motion picture. The story of a preacher’s daughter named Opal whose life is transformed by a scruffy dog named Winn-Dixie continues to touch the hearts of readers of all ages. Celebrate twenty years of Because of Winn-Dixie with a signature anniversary edition featuring a redesigned cover, an introduction by PEN/Faulkner Award–winning author Ann Patchett, and an afterword by Kate DiCamillo.
Kate DiCamillo is the author of many adored and award-winning books for young readers, including The Tale of Despereaux and Flora & Ulysses, which each received a Newbery Medal, as well as The Tiger Rising, The Miraculous Journey of Edward Tulane, The Magician's Elephant, and the Raymie Nightingale sequence of novels. A former National Ambassador for Young People’s Literature, she lives in Minneapolis, Minnesota.