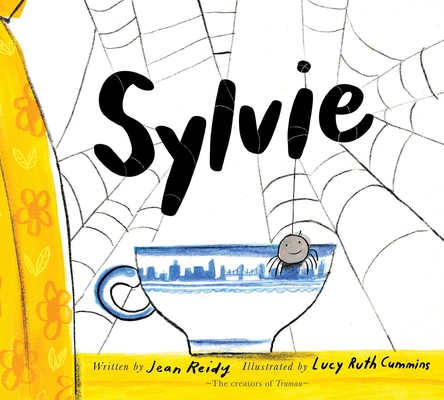 From the creators of Truman comes another delightful book about taking risks and stepping into the spotlight to bring joy to those around you.

— Sarah
One small spider takes a big risk to bring together the people she watches over in her apartment building in this charming picture book from the celebrated author and illustrator of Truman.

Sylvie hangs on a silvery thread, safely hidden under her damp, dark fire escape. Sure, it’s a little too close to the dumpster below, but if she stays carefully out of sight, she can watch over her people in the apartment building above—a painter, a proper lady, a man with a plan, and a girl with an exceptionally brave tortoise.

Day and night, night and day, Sylvie watches over them making sure everything is just so. Lately though, her people seem to be missing…something. Sylvie wants to help, but she’s always stayed out of view. After all, not everyone appreciates a spider who calls attention to herself. When a most audacious idea comes to her though, one that might make everything more than just so, maybe even just right, can Sylvie muster her moxie and risk stepping into the spotlight?
Jean Reidy’s bestselling and award-winning picture books have earned their spots as favorites among readers and listeners of all ages and from all over the world.  Her books include Truman and Sylvie, both illustrated by Lucy Ruth Cummins. She is a three-time winner of the Colorado Book Award, a Parents’ Choice Gold Award winner, a Charlotte Zolotow Honor winner, and recognized on “Best of” lists by School Library Journal, The New York Times, NPR, and Amazon. Jean writes from her home in Colorado where she lives right across the street from her neighborhood library…which she visits nearly every day. Visit her at JeanReidy.com.

Lucy Ruth Cummins is an author, an illustrator, and art director of children’s books. She has been happily paired with Jean Reidy for Truman, which was named a New York Times Best Children’s Book of 2019, and Sylvie. She also is the author-illustrator of A Hungry Lion, or A Dwindling Assortment of Animals; Stumpkin; Vampenguin; and Our Pool. When she was little, she had a pet spider in the shed where her dad kept the lawnmower. Every day little Lucy caught flies and placed them in her spider’s web at mealtimes. Lucy was born in Montreal, raised in upstate New York, and lives with her little family in Brooklyn, New York.
"Reidy records Sylvie’s qualms and enthusiasms with a breathless, enthusiastic voice...while Cummins’s digitally finished multimedia art combines reportorial immediacy with a kind of sketchbook impressionism that takes readers inside Sylvie’s head. Read with or without pandemic-era context in mind, it’s a warming story about the necessity of connection and community."
— Publishers Weekly

"Young readers will enjoy meeting a new small-but-mighty (and spidery) protagonist in this welcome return to the world of Truman, featuring a cameo from the tortoise himself. Laced with lovely alliteration and internal rhyme, the text introduces young listeners to the whimsy of language at storytime...Sylvie’s bubbly effervescence shows readers that it is well worth the courage it takes to be seen."
— BCCB