Democracy - And a Changing Civilisation - With an Excerpt from The Economic Philosophies, 1941 by Ratish Mohan Agrawala (Paperback) 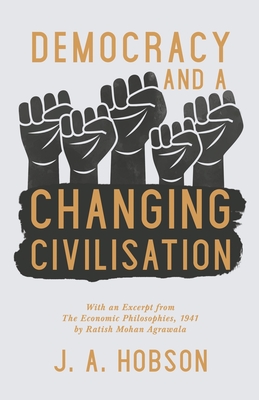 By J. A. Hobson, Ratish Mohan Agrawala (Notes by)
$18.99
Usually Ships in 1-5 Days
This book cannot be returned

"Democracy - And a Changing Civilisation" is a 1934 work by J. A. Hobson. Contents include: "Nineteenth-Century Democracy", "Liberty and Equality", "From Democracy to Dictatorship", "Can Dictatorship Succeed?", "The Reformation of Democracy", "Democracy and Public Opinion", "'The Closed State'", "Democracy and Internationalism", and "Survival Power of Democracy". A fascinating analysis of the effect democracy has had on civilisation throughout history recommended for those with a keen interest in economic philosophy. This classic work is being republished now in a new edition complete with an essay on 'The Economic Philosophy of J. A. Hobson' by Indian writer and political scientist Ratish Mohan Agrawala. John Atkinson Hobson (1858-1940) was an English social scientist and economist most famous for his writing on imperialism-which notably influenced Vladimir Lenin-as well as his theory of underconsumption. His early work also questioned the classical theory of rent and predicted the Neoclassical ""marginal productivity"" theory of distribution. Other notable works by this author include: "Roads To Freedom And Slavery", "The Hindu-Muslim Riots Their Causes And Cures", and "The Economic Philosophies".