Dinner at the Center of the Earth: A novel (Hardcover) 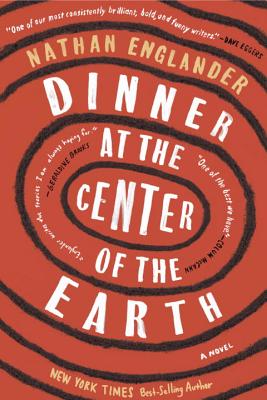 Dinner at the Center of the Earth: A novel (Hardcover)


Availability to be confirmed
The best work yet from the Pulitzer finalist and best-selling author of For the Relief of Unbearable Urges--a political thriller that unfolds in the highly charged territory of the Israeli-Palestinian conflict and pivots on the complex relationship between a secret prisoner and his guard.

A prisoner in a secret cell. The guard who has watched over him a dozen years. An American waitress in Paris. A young Palestinian man in Berlin who strikes up an odd friendship with a wealthy Canadian businessman. And The General, Israel's most controversial leader, who lies dying in a hospital, the only man who knows of the prisoner's existence.
From these vastly different lives Nathan Englander has woven a powerful, intensely suspenseful portrait of a nation riven by insoluble conflict, even as the lives of its citizens become fatefully and inextricably entwined--a political thriller of the highest order that interrogates the anguished, violent division between Israelis and Palestinians, and dramatizes the immense moral ambiguities haunting both sides. Who is right, who is wrong--who is the guard, who is truly the prisoner?
A tour de force from one of America's most acclaimed voices in contemporary fiction.
NATHAN ENGLANDER is the author of the novel The Ministry of Special Cases, and the story collections For the Relief of Unbearable Urges and What We Talk About When We Talk About Anne Frank, winner of the Frank O'Connor International Short Story Award and finalist for the Pulitzer Prize. His short fiction has been widely anthologized, most recently in 100 Years of the Best American Short Stories. Englander's play The Twenty-Seventh Man premiered at The Public Theater in 2012. He also translated the New American Haggadah and co-translated Etgar Keret's Suddenly a Knock on the Door. He is Distinguished Writer-in-Residence at New York University, and lives in Brooklyn, New York, with his wife and daughter.
“Glorious…devastating…a beautiful masterpiece.”
—NPR


"Nathan Englander's latest is, as usual, superb: a work of psychological precision and moral force, with an immediacy that captures both timeless human truth as well as the perplexities of the present day."
—Colson Whitehead


"A kaleidoscopic fairy tale of Israeli-Palestinian reconciliation... One of the exhilarating aspects of Dinner at the Center of the Earth is its expansive sense of space and time...The effect is to heighten events, to transcend history in favor of a more allegorical realm...Englander has built a complex structure, by which his narrative reveals itself in pieces, and the less we know in advance, the more vividly we feel its turns...with this novel he frames history as both an act and a failure of the imagination, which is to say, in inherently, and inescapably, human terms."
—Los Angeles Times


"Englander has produced a masterpiece of literary imagination that seems to mirror his own evolution."
—Jerusalem Post


"The ability to see the world from both Israeli and Palestinian perspectives is what gives Dinner at the Center of the Earth its optimistic moral center. Both Israelis and Palestinians are faithful to the righteousness of their own cause, but at times, characters can see a way past this most charged of conflicts to a future of peace... Yet while the novel is optimistic, it is also realistic. The violence, and the historical memory of past violence, keeps both sides addicted to carrying out further attacks in the name of retribution. Englander’s ability to capture the almost pathological nature to ‘get even’ shines."
—NTK Network


"Since Englander set out to write a thriller, he delivers all of the twists and turns, the shocks and surprises, that we are entitled to expect in that genre. But he does not disappoint the readers of his earlier work who know him for his exquisite sensibilities and the sheer power of his literary prose. For that reason, Dinner at the Center of the Earth will only expand his reach and enrich his already considerable reputation."
—Jewish Journal


“A dark, profound meditation on the state of Israel and also a gripping thriller, full of twists and moral ambiguity, it is an absolute joy to read.”
—Jewish Chronicle


“In Englander’s hands, storytelling is a transformative act. Put him alongside Singer, Carver, and Munro. Englander is, quite simply, one of the very best we have.”
—Colum McCann


“Englander tells the tangled truth of life in prose that, as ever, surprises the reader with its gnarled beauty.”
—Michael Chabon


“The depth of Englander’s feeling is the thing that separates him from just about everyone. You can hear his heart thumping feverishly on every page.”
—Dave Eggers


“Nathan Englander is one of those rare writers who, like Faulkner, manages to make his seemingly obsessive, insular concerns all the more universal for their specificity.”
—Richard Russo