Air Traffic: A Memoir of Ambition and Manhood in America (Hardcover) 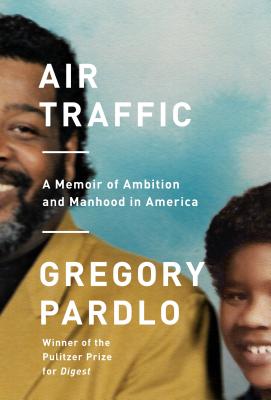 By Gregory Pardlo
$26.95
Availability to be confirmed

From the beloved Pulitzer Prize-winning poet: an extraordinary memoir and blistering meditation on fatherhood, race, addiction, and ambition.

Gregory Pardlo's father was a brilliant and charismatic man--a leading labor organizer who presided over a happy suburban family of four. But when he loses his job following the famous air traffic controllers' strike of 1981, he succumbs to addiction and exhausts the family's money on more and more ostentatious whims. In the face of this troubling model and disillusioned presence in the household, young Gregory rebels. Struggling to distinguish himself on his own terms, he hustles off to Marine Corps boot camp. He moves across the world, returning to the United States only to take a job as a manager-cum-barfly at his family's jazz club.

Air Traffic follows Gregory as he builds a life that honors his history without allowing it to define his future. Slowly, he embraces the challenges of being a poet, a son, and a father as he enters recovery for alcoholism and tends to his family. In this memoir, written in lyrical and sparkling prose, Gregory tries to free himself from the overwhelming expectations of race and class, and from the tempting yet ruinous legacy of American masculinity.

Air Traffic is a richly realized, deeply felt ode to one man's remarkable father, to fatherhood, and to the frustrating yet redemptive ties of family. It is also a scrupulous, searing examination of how manhood can be fashioned in our cultural landscape.

GREGORY PARDLO is the author of Digest, winner of the 2015 Pulitzer Prize for Poetry. Digest was also nominated for an NAACP Image Award, named a standout book by the Academy of American Poets, a New York Times best poetry book of the year, and a finalist for the Hurston Wright Legacy Award and INDIEFAB Book of the Year. Gregory Pardlo's other awards include fellowships from the Guggenheim Foundation, the National Endowment for the Arts, and the New York Foundation for the Arts. His first poetry collection, Totem, won the American Poetry Review/Honickman First Book Prize in 2007. He is Poetry Editor of Virginia Quarterly Review, and lives in Brooklyn with his wife and two kids.

“A haunting memoir by the Pulitzer Prize-winning poet Gregory Pardlo. The book is centered on the troubled relationship between the author and his father, although it roams freely in many other directions....Simple description does not do Pardlo’s story justice; only his own sublime words can achieve that.”
—Janet Maslin, The New York Times, “17 Refreshing Books to Read This Summer”

“Riveting....Sparkles with lyricism and imaginative muscle....Pardlo shares these reflections in prose that seems powerful and effortless.”
—Jabari Asim, The Washington Post

“A rich and thoughtful meditation on the ways our personal histories and childhood memories influence our everyday, Air Traffic is a truly stunning work.”
—Bustle

“A masterwork, blending personal and family history with a historicized critique on blackness and masculinity....Manages to do what only great memoirs of this scale can: to tell a story about himself that is also about America, one that feels true.”
—Vogue, “Best Books of Spring”

“The winner of the 2015 Pulitzer Prize for poetry, Gregory Pardlo also writes damn good prose....We often talk about Great American Novels, but Air Traffic is an excellent contender in the Great American Memoir category, an honest and touching look at what it’s like to grow up black and male in this country.”
—Vulture, “Best Books of Spring”

“For all we, as Americans, want to believe in the Dream; here is our rude awakening....Function[s] like someone who jumps up from sleep, thinking the nightmare is over, only to discover this is reality. Pardlo’s rendering of his life and the people in it takes on a quiet nobility.... [It] resists the temptation to achieve any simple resolutions.”
—Yahdon Israel, Poets & Writers

“A book about [Pardlo’s] father’s legacy of manhood and his own struggle to escape it....A restless, probing memoir.”
—Kristen Martin, Lithub

“A masterful consideration of manhood in contemporary America: the lies we tell ourselves, the struggle to find our own identity in the shadow of fathers, and the sweet perils of ambition.”
—Nick Ripatrazone, The Millions

“Poets...seem to have superpowers when it comes to autobiographical prose. Pardlo’s work is in this tradition....A shimmering memoir tracking his furtive steps toward manhood as his forceful labor-organizer father spiraled downward....Economical in style and robust in scope, Air Traffic tells of evolving from destructive rebellion to the pursuit of being a cosmopolitan artist with a ‘magical blue passport.’”
—The National, “5 Hot Books”

“A razor-sharp look into the inner workings of a writer’s psyche as it is affected by the changing definitions of identity, masculinity, and labor in the 20th century.... Rarely do we see authors blend so seamlessly the historical events that shaped their childhoods with their retrospective perceptions of them. More importantly, Air Traffic effectively serves as a rare homage to the strike that helped define the labor force of today.”
—Michael Valinsky, Kirkus Reviews

“In vivid, improvisational prose, Pulitzer Prize-winning poet Pardlo writes of his upbringing in New Jersey and the influences on his life and work....He traces the complexities of race and class through his hard-partying young adulthood, a first marriage, then settling down with strong-willed Ginger, participating in an intervention with his brother Robbie, and his father’s death.”
—BBC.com, “Ten books to read in April”

"[A] boisterous and affectionate memoir....Powerfully illustrates one man’s attempt to reconcile the ways that family dynamics influence and infiltrate people’s lives."
—Publisher's Weekly

“A careful and delicately crafted window into the private life of the author, imparting knowledge and insight on identity and race politics in 20th-century America.... Masterfully personal, with passages that come at you with the urgent force of [Pardlo’s] powerful convictions.... The author manages to distill stereotypes to their very core, providing a genuine and productive exposition of issues of masculinity in the contemporary world. An engrossing memoir of history and memory.”
—Kirkus Reviews

“How are families shaped by race, economics, genetics, love, jealousy and rifts? These are the questions Gregory Pardlo ponders in his highly anticipated memoir....Pardlo seems to be defying the odds, turning his pain into mesmerizing poetry and prose.”
—Bookpage

"Unflinchingly honest and audaciously vulnerable, Air Traffic is a testament to what we must live through on the path to understanding what we are living for."
—Tracy K. Smith

“Gregory Pardlo’s Air Traffic is not just one of the best memoirs I’ve ever read—it’s an ice core drill through the complexities of American life. Each chapter illuminates how economics, class, labor relations, education, and race have shaped the American character, and the lives of the truly remarkable people here, with deep knowledge and with exquisite sentences that alternately surprise, move, and delight.”
—Phil Klay, author of Redeployment

“Air Traffic is a book about love and unlikely odds, about what we inherit and how we escape. Greg Pardlo offers something magnificent here—a deeply personal investigation that pulls back the veil on our current national (and historic) malaise. Winners win. So what? The story stinks of empire. Pardlo’s father, who is at the heart of this story, is of a type that is familiar to me, yet Pardlo has managed to pull a thread of truth from all the bullshit, and from that thread he has woven a life.”
—Nick Flynn, author Another Bullshit Night in Suck City

“With grace and edge, Greg Pardlo’s Air Traffic refuses to satisfy itself with easy epiphanies that might populate another book. Instead, it turns over these revelations like so many mossy stones to show the live creatures beneath: the broken promises and blemished mythologies and unexpected moments of grace that compost the soil of any life. Pardlo’s voice is smart, funny, restless, ruminative, and not quite like anything you’re ever read. Change that. Read this.”
—Leslie Jamison

“Air Traffic is at once a searing memoir of a crucial labor movement defeat, and a moving consideration of a father's legacy--a profound reflection on both the American past and present. And with it, Pardlo shows himself a memoirist to rival the poet he already is.”
—Alexander Chee, author of Queen of the Night

“A remarkable achievement, Air Traffic is a mordantly charming, raw, comic and wise blend of intellectual sophistication and deeply honest storytelling. It is also a glorious addition to the father-son memoir genre that extends from John Stuart Mill, Edmund Gosse and V. S. Pritchett to Geoffrey Wollf and Philip Roth. Gregory Pardlo has written a classic. ”
—Phillip Lopate

“Gregory Pardlo has written an elegant series of essays that deftly illuminate complex issues of race and labor politics in America, the ways that alcoholism and ambition seep their vivid dyes through the fibers of a family, and the messy redemption of our greatest efforts to change ourselves. With a poet's patience, he distills the riot of living into clean and graceful prose that I gulped in luxurious draughts.”
—Melissa Febos, author of Whip Smart and Abandon Me

“Pardlo’s memoir is by turns analytical, angry, ironic, raw and emotional. A Pulitzer Prize-winning poet, he fortifies his prose with images that jolt reflection and meditation to something closer to lived and felt experience....While this vertiginous memoir covers Pardlo’s youth, brief Marine reserves stint, false-starting college career, two marriages, alcoholism, parenthood, and the constant negotiations of race, its center is Pardlo’s relationship with his father. A demanding man, both blunt and cryptic, the elder Pardlo tested his son with a rigorous trial-by-dictionary that required the second-grader to look up an assigned word, memorize the definition, and learn all other unfamiliar words it referenced. That this ‘ordeal’ gave Pardlo a love of language rather than an aversion to it is amazing....Among the standouts in this impressive overview of a life are Pardlo’s insightful profiles of the family dynamics of alcoholism, and the sheer exuberance of family life. ‘Behind The Wheel’ could almost be a short story, as the voices of three generations quibble, explain, protest, and joke, all at the same time.”
—Laurie Greer, Politics & Prose