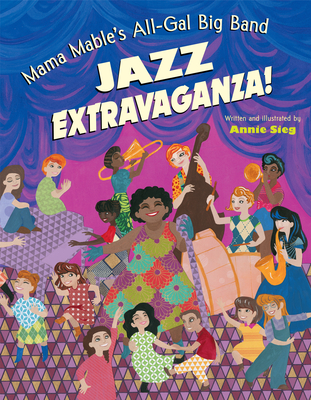 
Availability to be confirmed
Debut author-illustrator Annie Sieg takes young readers on an inspiring trip to the music halls of the 1940s, when groups of young female musicians broke racial and gender barriers--and forever changed the face of jazz.

Everyone knows about Rosie the Riveter, the icon for working women during World War II. Now prepare to meet a group of young women who did the same for music! From saxophonists and drummers to trumpeters, pianists, trombonists, and singers, talented young women across the country picked up their instruments--and picked up the spirits of an entire nation--during the dark days of World War II. Together they formed racially integrated female bands and transformed the look and sound of jazz, taking important strides for all women in the world of music. Debut author-illustrator Annie Sieg shines a spotlight on the young women who epitomized the sound and spirit of jazz of the era, while opening young readers' eyes and ears to the role of women then and now in music.
Annie Sieg is an illustrator and writer whose fierce feminism has never gotten in the way of her career as a ballroom dance teacher, or her interests in folklore, music, and jazz. She is based in Seattle. Learn more about her at anniesieg.com and https://anniesiegart.tumblr.com/.
“A toe-tapping readaloud, a joyful vision of women in community, and a stepping stone to a discussion of music as a social enterprise.” —Publishers Weekly

“The music is described in lyrical detail, ending with a spread about the healing power of music. Illustrations are full color and vivid.” —School Library Journal