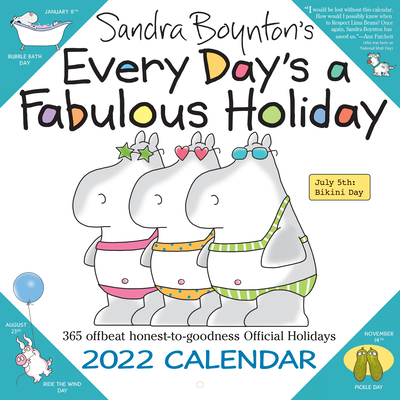 By Sandra Boynton, Workman Calendars (With)


On Our Shelves Now
- This book cannot be returned
Make every day fabulous with a zany (and real!) holiday celebrated by Sandra Boynton.

Pickle Day (November 14)! Talk Like a Pirate Day (September 19)! Appreciate a Dragon Day (January 16)! Yes! For everyone who loves holidays (and who doesn’t?), here’s a daily reminder that every day is a holiday—for someone. Celebrating the obscure, offbeat, but awesome occasions that make the most ordinary days special, Every Day’s a Fabulous Holiday spotlights 365 little-known but absolutely real—and maybe a little peculiar—holidays. Holidays to make kids happy: No Homework Day (May 6). Holidays to make parents happy: National Clean Up Your Room Day (May 10). Holidays to make everyone happy: International Sweatpants Day (January 21). The lively, full-color grids are illustrated with Sandra Boynton’s distinctive, beloved animal art—one fabulous large image up top and lots more terrific, small illustrations throughout the grid below. It’s pure Boynton, and pure joy. Printed on FSC-certified paper.

Sandra Boynton is a popular American cartoonist, children's author, songwriter, producer, and director. Since 1974, Boynton has written and illustrated over sixty children's books and seven general audience books, including five New York Times bestsellers. More than 70 million of her books have been sold, "mostly to friends and family," she says. She has also written (with Michael Ford) and produced six albums of renegade children's music. Three of her albums have been certified Gold (over 500,000 copies sold), and Philadelphia Chickens, nominated for a Grammy, has gone Platinum (over 1 million copies sold). Boynton has also directed twelve music videos of her songs, including the award-winning "One Shoe Blues" starring B.B. King, "Alligator Stroll" starring Josh Turner, and "Tyrannosaurus Funk" (animation) sung by Samuel L. Jackson. She lives in rural New England, and her studio is in a barn with perhaps the only hippopotamus weathervane in America.