The Art Of Logical Thinking: : Or The Laws Of Reasoning (Aura Press) (Paperback) 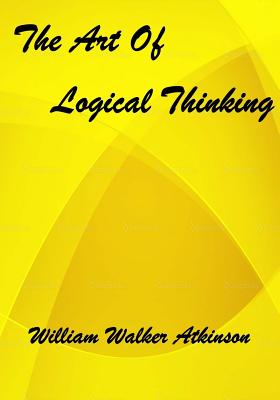 The Art Of Logical Thinking: : Or The Laws Of Reasoning (Aura Press) (Paperback)


Special Order - Usually Arrives in 1-5 Days
- This book cannot be returned
In this volume we hope to be able to point out the methods and principles of correctly using the reasoning faculties of the mind, in a plain, simple manner, devoid of useless technicalities and academic discussion. We shall adhere, in the main, to the principles established by the best of the authorities of the old school of psychology, blending the same with those advanced by the best authorities of the New Psychology. No attempt to make of this book a school text-book shall be made, for our sole object and aim is to bring this important subject before the general public composed of people who have neither the time nor inclination to indulge in technical discussion nor academic hair-splitting, but who desire to understand the underlying working principles of the Laws of Reasoning.
William Walker Atkinson (December 5, 1862 - November 22, 1932) was an attorney, merchant, publisher, and author, as well as an occultist and an American pioneer of the New Thought movement. William Walker Atkinson was born in Baltimore, Maryland on December 5, 1862, [4] to William and Emma Atkinson. He began his working life as a grocer at 15 years old, probably helping his father. He married Margret Foster Black of Beverly, New Jersey, in October 1889, and they had two children. The first probably died young. The second later married and had two daughters. Atkinson pursued a business career from 1882 onward and in 1894 he was admitted as an attorney to the Bar of Pennsylvania. While he gained much material success in his profession as a lawyer, the stress and over-strain eventually took its toll, and during this time he experienced a complete physical and mental breakdown, and financial disaster. He looked for healing and in the late 1880s he found it with New Thought, later attributing the restoration of his health, mental vigor and material prosperity to the application of the principles of New Thought. Throughout his subsequent career, Atkinson was thought to have written under many pseudonyms. It is not known whether he ever confirmed or denied authorship of these pseudonymous works, but all of the supposedly independent authors whose writings are now credited to Atkinson were linked to one another by virtue of the fact that their works were released by a series of publishing houses with shared addresses and they also wrote for a series of magazines with a shared roster of authors. Atkinson was the editor of all of those magazines and his pseudonymous authors acted first as contributors to the periodicals, and were then spun off into their own book-writing careers-with most of their books being released by Atkinson's own publishing houses. n 1903, the same year that he began his writing career as Yogi Ramacharaka, Atkinson was admitted to the Bar of Illinois. Perhaps it was a desire to protect his ongoing career as a lawyer that led him to adopt so many pseudonyms-but if so, he left no written account documenting such a motivation. How much time Atkinson devoted to his law practice after moving to Chicago is unknown, but it is unlikely to have been a full-time career, given his amazing output during the next 15 years as a writer, editor, and publisher in the fields of New Thought, yoga, occultism, medium ship, divination, and personal success.