Help Your Customer Buy a Car in Six Easy Steps: Control the Process and the Sale Will Control Itself (Paperback) 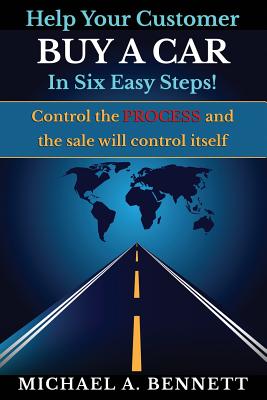 Michael is native to Arizona, where he grew up as a working cowboy on an old western style cattle ranch. Sales seemed to be an acceptable alternative to the hard labor of ranching. He started in the auto industry in his early 20s as a salesperson at a Honda store in Prescott Arizona, after leaving an alarm company where he had started as a salesman and the last year had been working as a regional sales manager. The car sales job was originally meant to be temporary until the non-compete had been satisfied, but it was going so well by the end of the term and earning Michael more income than the management position at the alarm company had that it became the beginning of a new career path. Michael sold for nearly five years before a finance position became available. The skills that he developed during this time helped him in the creation of "The Two Minute Presentation." Michael spent six years as a finance manager and director before a promotion to sales manager. From there he was promoted to General sales manager for a few years and then made a very unusual transition into the office as the comptroller. When offered that position, he asked, "Why would you want me to work in the office instead of a production position?" The owner of the dealership said, "I can teach you accounting but I can't teach someone to be honest." The position paid the same as the General Manager position and offered a great learning experience, so Michael took the job and after a few years was promoted to General Manager and CFO of the company, which was a five rooftop group selling over six hundred units per month when he left. He lives south of Mobile on Mon Louis Island with his wife Shelly. For fun, Michael and Shelly like to travel. They spent years riding horses and motorcycles, boating and golfing. Michael has such a vast working knowledge of a car dealership that he is able to understand the importance of doing a good job in F&I. not only for the added income, but also for CSI. The "Two Minute Presentation" was designed over nearly ten thousand car deals and is proven to give the customer the best experience they've ever had buying a vehicle. Michael has trained hundreds of finance people in his career and is quickly becoming one of the most well recognized names in the industry. With this system, producers sell more products, make more profit and do it easier and faster than anyone believed was possible.