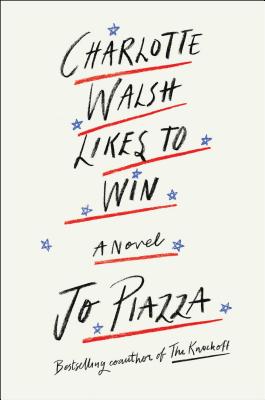 From Jo Piazza, the bestselling author of The Knock Off, How to Be Married, and Fitness Junkie, comes an exciting, insightful novel about what happens when a woman wants it all—political power, a happy marriage, and happiness—but isn’t sure just how much she’s willing to sacrifice to get it.

Charlotte Walsh is running for Senate in the most important race in the country during a midterm election that will decide the balance of power in Congress. Still reeling from a presidential election that shocked and divided the country and inspired by the chance to make a difference, she’s left behind her high-powered job in Silicon Valley and returned, with her husband Max and their three young daughters, to her downtrodden Pennsylvania hometown to run in the Rust Belt state.

Once the campaign gets underway, Charlotte is blindsided by just how dirty her opponent is willing to fight, how harshly she is judged by the press and her peers, and how exhausting it becomes to navigate a marriage with an increasingly ambivalent and often resentful husband. When the opposition uncovers a secret that could threaten not just her campaign but everything Charlotte holds dear, she has to decide just how badly she wants to win and at what cost.

A searing, suspenseful story of political ambition, marriage, class, sexual politics, and infidelity, Charlotte Walsh Likes to Win is an insightful portrait of what it takes for a woman to run for national office in America today. In a dramatic political moment like no other with more women running for office than ever before, Jo Piazza’s novel is timely, engrossing, and perfect for readers on both sides of the aisle.
Jo Piazza is a bestselling author, podcast creator, and award-winning journalist. She is the national and international bestselling author of many critically acclaimed novels and nonfiction books including We Are Not Like Them, Charlotte Walsh Likes to Win, The Knockoff, and How to Be Married. Her work has been published in ten languages in twelve countries and four of her books have been optioned for film and television. A former editor, columnist, and travel writer with Yahoo, Current TV, and the Daily News (New York), her work has also appeared in The Wall Street Journal, The New York Times, New York magazine, Glamour, Elle, Time, Marie Claire, The Daily Beast, and Slate. She holds an undergraduate degree from the University of Pennsylvania in economics and communication, a master’s in journalism from Columbia University, and a master’s in religious studies from New York University.
PRAISE FOR CHARLOTTE WALSH LIKES TO WIN

“A smart and funny novel about the cost of being a woman in the public eye. Told with Jo Piazza's characteristic wit, humor and insight, Charlotte Walsh Likes to Win is a winner.”

“Charlotte Walsh Likes to Win is real, raw and complicated. Piazza's writing is filled with wit, charm and humor, which is why I loved (and in some instances lived during my time in the White House) this novel. I laughed, winced, sighed and cried. Jo has done it again.”

—Alyssa Mastromonaco, author of Who Thought This Was a Good Idea?

“This enthralling page-turner is a rallying cry to the #TimesUp generation, bringing a journalist’s eye to the politics of female ambition and what it truly takes for a woman to run for office. It’s smart, fierce, and so much fun to read.

—Camille Perri, author of The Assistants and When Katie Met Cassidy

“Charlotte had me from her first feisty line. This novel is the perfect blend of propulsive plot and sharp detail. And it’s particularly timely. Piazza crafts a portrait of what it means to be an ambitious woman today. Charlotte Walsh likes to win and she won me over completely.”