The Lying Game: A Novel (Hardcover) 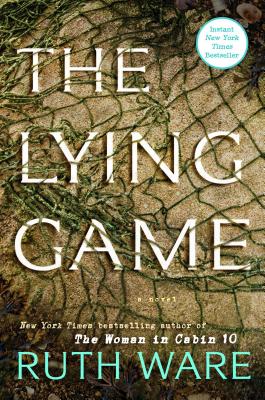 The Lying Game: A Novel (Hardcover)

From the instant New York Times bestselling author of blockbuster thrillers In a Dark, Dark Wood and The Woman in Cabin 10 comes Ruth Ware’s chilling new novel, The Lying Game.

On a cool June morning, a woman is walking her dog in the idyllic coastal village of Salten along a tidal estuary known as the Reach. Before she can stop him, the dog charges into the water to retrieve what first appears to be a wayward stick, but to her horror, turns out to be something much more sinister...

The next morning, three women in and around London—Fatima, Thea, and Isabel—receive the text they had always hoped would NEVER come, from the fourth in their formerly inseparable clique, Kate, that says only, “I need you.”

The four girls were best friends at Salten, a second rate boarding school set near the cliffs of the English Channel. Each different in their own way, the four became inseparable and were notorious for playing the Lying Game, telling lies at every turn to both fellow boarders and faculty, with varying states of serious and flippant nature that were disturbing enough to ensure that everyone steered clear of them. The myriad and complicated rules of the game are strict: no lying to each other—ever. Bail on the lie when it becomes clear it is about to be found out. But their little game had consequences, and the girls were all expelled in their final year of school under mysterious circumstances surrounding the death of the school’s eccentric art teacher, Ambrose (who also happens to be Kate’s father).

Atmospheric, twisty, and with just the right amount of chill that will keep you wrong-footed—which has now become Ruth Ware’s signature style—The Lying Game is sure to be her next big bestseller. Another unputdownable thriller from the Agatha Christie of our time.
Ruth Ware worked as a waitress, a bookseller, a teacher of English as a foreign language, and a press officer before settling down as a full-time writer. She now lives with her family in Sussex, on the south coast of England. She is the #1 New York Times and Globe and Mail (Toronto) bestselling author of In a Dark, Dark Wood; The Woman in Cabin 10; The Lying Game; The Death of Mrs. Westaway; The Turn of the Key; and One by One. Visit her at RuthWare.com or follow her on Twitter @RuthWareWriter.
"Ware's third outing is just as full of psychological suspense as her earlier books, but there is a quietness about this one, a slower unraveling of tension and fear, that elevates it above her others...Cancel your plans for the weekend when you sit down with this book, because you won't want to move until it's over."
— Kirkus Reviews, Starred Review

“Ware masterfully harnesses the millhouse’s decrepit menace to create a slow-rising sense of foreboding, darkening Isa’s recollections of the weeks leading to Ambrose’s disappearance… with arguably her most complex, fully realized characters yet, this one may become her biggest hit yet.”
— Booklist, Starred Review

"[An] engrossing psychological thriller... Ware builds up a rock-solid cast of intriguing characters and spins a mystery that will keep readers turning pages to the end.”
— Publishers Weekly

"New York Times bestselling author Ruth Ware and her new thriller The Lying Game will have you full of anticipation."
— Library Journal

"From the author of the hit novel, The Woman in Cabin 10, comes another edge-of-your-seat thriller you don't want to miss."

“Ware has become a household name in psychological suspense, and her third release is highly anticipated…[The Lying Game is] sure to be her next summer hit.”

“Readers who've devoured Ware's bestsellers The Woman in Cabin 10 and In a Dark, Dark Wood won't need much encouragement to pick up a copy of her latest thriller. This story…is as gripping and atmospheric as Ware's previous books, with unexpected twists around every corner.”
— Bookpage

"Perhaps one of the most twisty and suspenseful titles of 2017."
— Mystery Tribune

"The Lying Game is tense, addictive, and not to be missed."
— Crime by the Book

"Fans of the mystery author who just won't quit will recognize Ware's singular ability to bait and switch in this wholly original story about four friends who conceive, innocently at first, a game of lies with dire repercussions."
— Marie Claire

"Missing Big Little Lies? Dig into this psychological thriller about whether you can really trust your nearest and dearest."
— Cosmopolitan

"The author of The Woman in Cabin 10 delivers a thoughtful thriller about four friends whose shared childhood secret threatens them now. A gripping whodunnit."
— Good Housekeeping

"So many questions... Until the very last page! Needless to say, I could not put this book down!"
— Reese Witherspoon

"A single cryptic text, ‘I need you,’ reunites four friends in the stippled light of an English seaside village just as surely as it signals readers that they’re in the hands of a pro…The Lying Game makes good on its premise that tall tales have consequences, especially when they’re exposed to the glare of truth."
— New York Times Book Review

"I was eager for Ruth Ware's The Lying Game to come out this year and it did not disappoint. As the eerie and atmospheric story cleverly unfolds, the suspense builds. This intriguing thriller is so much more than a whodunit. Ware reveals the characters’ stories and has the reader wondering why 'it' happened. Excellent read."
— Bookish