The Crowded Hour: Theodore Roosevelt, the Rough Riders, and the Dawn of the American Century (Hardcover) 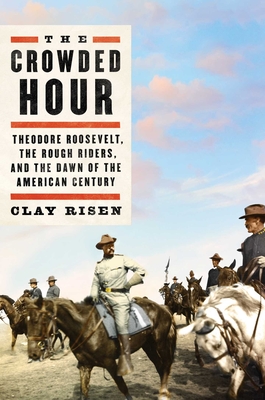 By Clay Risen
$30.00
Availability to be confirmed

The dramatic story of the most famous regiment in American history: the Rough Riders, a motley group of soldiers led by Theodore Roosevelt, whose daring exploits marked the beginning of American imperialism in the 20th century.

When America declared war on Spain in 1898, the US Army had just 26,000 men, spread around the country—hardly an army at all. In desperation, the Rough Riders were born. A unique group of volunteers, ranging from Ivy League athletes to Arizona cowboys and led by Theodore Roosevelt, they helped secure victory in Cuba in a series of gripping, bloody fights across the island. Roosevelt called their charge in the Battle of San Juan Hill his “crowded hour”—a turning point in his life, one that led directly to the White House. “The instant I received the order,” wrote Roosevelt, “I sprang on my horse and then my ‘crowded hour’ began.” As The Crowded Hour reveals, it was a turning point for America as well, uniting the country and ushering in a new era of global power.

Both a portrait of these men, few of whom were traditional soldiers, and of the Spanish-American War itself, The Crowded Hour dives deep into the daily lives and struggles of Roosevelt and his regiment. Using diaries, letters, and memoirs, Risen illuminates a disproportionately influential moment in American history: a war of only six months’ time that dramatically altered the United States’ standing in the world. In this brilliant, enlightening narrative, the Rough Riders—and a country on the brink of a new global dominance—are brought fully and gloriously to life.

Clay Risen is the deputy op-ed editor at The New York Times and the award-nominated author of The Crowded Hour; Single Malt: A Guide to the Whiskies of Scotland; The Bill of the Century: The Epic Battle for the Civil Rights Act; the bestselling American Whiskey, Bourbon and Rye: A Guide to the Nation’s Favorite Spirit; and A Nation on Fire: America in the Wake of the King Assassination. He lives in Brooklyn with his wife and two children.

“Fast-paced, carefully researched…Risen is a gifted storyteller who brings context to the chaos of war. The Crowded Hour feels like the best type of war reporting — told with a clarity that takes nothing away from the horrors of the battlefield.”
—The New York Times Book Review

“A gripping tale ... [Risen's] more ambitious goal is to show how Roosevelt’s volunteer regiment was an important catalyst in the emergence of a new understanding of America’s place in the world …one of the most compelling features of The Crowded Hour is the attention paid to the mélange of characters who followed [Roosevelt] in battle. Risen depicts the Rough Riders as representatives of modern America, [giving] welcome attention to this cast of characters.”
—The Washington Post

“Risen clears much of the battlefield smoke to reveal the conditions, events and characters that culminated in TR’s supposed charge up San Juan Hill…eminently readable…That TR’s men are famous as much for what they symbolize as for what they did makes them no less fascinating to read about."
—The Wall Street Journal

“Let the author and historian Clay Risen (who also writes eloquently on bourbon and rye), be your guide to a fascinating and sometimes forgotten part of American history—when Theodore Roosevelt led the volunteer cavalry unit called the Rough Riders in the Spanish-American War and marked a turning point for the country and for the future president.”
—Garden and Gun, Best New Books for June 2019

“An engaging, deeply researched account of one the most famous battles in American military history…The battle in Cuba was just one crowded hour in [Roosevelt’s] crowded and extraordinary life; this book makes it both a dashing adventure story and a revealing window into our history.”
—Tampa Bay Times

"In his new book, The Crowded Hour, Clay Risen makes a strong case for the proposition that the Spanish-American War of 1898 was American foreign policy’s tipping point for what followed in the 20th and early 21st centuries, with Theodore Roosevelt and his Rough Riders as the change agents ... For those who enjoy stories of bona-fide patriotism, valor, and sacrifice, The Crowded Hour fits the bill."
—Washington Independent Review of Books

“Risen’s power lies in the narrative format, bringing the reader along with the Rough Riders as they begin their path into the American mythos. This book will resonate with longtime historians and first-time readers alike.”
—Army Magazine

"Clay Risen has given us an illuminating and elegant account of how Theodore Roosevelt and his Rough Riders in many ways founded what would become, in Henry Luce's phrase, the American Century. Restless and brave, flawed and noble, TR and his compatriots embodied an emerging global nation—for better and for worse. It was indeed a crowded hour, not only for Roosevelt but for America."
—Jon Meacham, author of The Soul of America

“Scrupulously researched and dramatically narrated, The Crowded Hour showcases Theodore Roosevelt in all of his Rough Rider glory. Clay Risen, a marvelous historian,  brings the Spanish American War and the Gilded Age back to life in these vibrant pages. All of TR’s undaunted hubris, bedrock patriotism, derring-do, and political genius are captured in this fast-paced war epic.”
—Douglas Brinkley, Katherine Tsanoff Brown Chair in Humanities and Professor of History at Rice University and author of The Wilderness Warrior: Theodore Roosevelt and the Crusade for America

“Here, in cinematic fashion, Clay Risen captures the nearly inexhaustible energy and irrepressible charisma of Teddy Roosevelt at the moment of his meteoric rise into the national consciousness. Through careful sifting and resourceful reporting that runs both broad and deep, The Crowded Hour brings fresh insight and a modern sensibility to this classic episode of American history.”
—Hampton Sides, author of Blood and Thunder and On Desperate Ground