The Third Wave: An Entrepreneur's Vision of the Future (Hardcover) 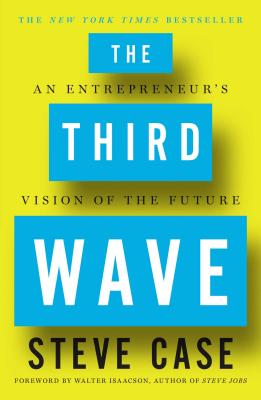 One of America’s most accomplished entrepreneurs—a pioneer who made the internet part of everyday life and orchestrated the largest merger in the history of business—shares a roadmap for how anyone can succeed in a world of rapidly changing technology.

Steve Case’s career began when he cofounded America Online (AOL) in 1985. At the time, only three percent of Americans were online. It took a decade for AOL to achieve mainstream success, and there were many near-death experiences and back-to-the-wall pivots. AOL became the top performing company of the 1990s, and at its peak more than half of all consumer internet traffic in the United States ran through the service. After Case engineered AOL’s merger with Time Warner and he became Chairman of the combined business, Case oversaw the biggest media and communications empire in the world.

In The Third Wave, which pays homage to the work of the futurist Alvin Toffler (from whom Case has borrowed the title, and whose work inspired him as a young man), Case takes us behind the scenes of some of the most consequential and riveting business decisions of our time while offering illuminating insights from decades of working as an entrepreneur, an investor, a philanthropist, and an advocate for sensible bipartisan policies.

We are entering, as Case explains, a new paradigm called the “Third Wave” of the internet. The first wave saw AOL and other companies lay the foundation for consumers to connect to the Internet. The second wave saw companies like Google and Facebook build on top of the Internet to create search and social networking capabilities, while apps like Snapchat and Instagram leverage the smartphone revolution. Now, Case argues, we’re entering the Third Wave: a period in which entrepreneurs will vastly transform major “real world” sectors like health, education, transportation, energy, and food—and in the process change the way we live our daily lives. But success in the Third Wave will require a different skill set, and Case outlines the path forward.

The Third Wave is part memoir, part manifesto, and part playbook for the future. With passion and clarity, Case explains the ways in which newly emerging technology companies (a growing number of which, he argues, will not be based in Silicon Valley) will have to rethink their relationships with customers, with competitors, and with governments; and offers advice for how entrepreneurs can make winning business decisions and strategies—and how all of us can make sense of this changing digital age.

Steve Case is one of America’s most accomplished entrepreneurs—a pioneer who made the Internet part of everyday life and orchestrated the largest merger in the history of business between America Online (AOL) and Time Warner.  Case’s entrepreneurial career began when he cofounded AOL, which became the top performing company of the 1990s. At its peak, nearly half of Internet users in the United States signed on through AOL. As chairman and CEO of Revolution, a Washington, DC based investment firm he cofounded in 2005, Case partners with visionary entrepreneurs to build businesses such as Zipcar, LivingSocial, Sweetgreen, and many others. Case was the founding chair of the Startup America Partnership—an effort launched at the White House to accelerate high-growth entrepreneurship throughout the nation. A member of the Presidential Ambassadors for Global Entrepreneurship, Case also serves as Chairman of the Case Foundation, which he established with his wife Jean in 1997.

“In the Third Wave, Steve Case has drafted a compelling roadmap for the future – one that can help us make sense of the technological changes reshaping our economy and the world. A fascinating read.”
—Sheryl Sandberg, Facebook COO and founder of LeanIn.Org

“I've been waiting to read Steve's story and I wasn't disappointed. His business career is straight out of Horatio Alger and carries important lessons for all entrepreneurs.”
—Warren Buffett, CEO, Berkshire Hathaway

“We are at the beginning of the next industrial revolution where the combination of software and industrial machines is building the foundation for a new wave of innovation. With clarity and passion, Steve provides a manifesto for the future of innovation and entrepreneurship. It's a must read from a visionary leader for entrepreneurs, corporate executives, and anyone trying to succeed during the Third Wave."
—Jeff Immelt, Chairman and CEO, GE

“The Third Wave is essential reading for leaders in business and government, as well as for anybody trying to make sense of our rapidly changing world. I’ve worked with Steve for two decades, and I've always been impressed with his intellect and captivated by his insights. If you read this book, you will be, too.”
—General Colin Powell, former Secretary of State (and former AOL board member)

“Steve Case made history when he created America Online and introduced the Internet to the world. Steve's startup story is captivating, and chock full of important insights and lessons. But this is not a book about the past; it’s a bold and compelling vision for what’s coming next. The Third Wave is required reading for every entrepreneur.”
—Brad Feld, co-founder, TechStars and Foundry Group, author of Startup Life

“A true visionary, Steve Case understood years ago the tectonic shifts that were to occur in society, fueled by technology and acted with purpose and passion. Case’s book, The Third Wave, clarifies for leaders the decisions necessary to thrive in a future increasingly disrupted by accelerating knowledge-creation and sharing.”
– Alvin and Heidi Toffler, authors of the original ‘The Third Wave’

"The Third Wave is an indispensable book for understanding the history of the Internet and preparing for what's next. Entrepreneurs looking to build truly transformational businesses should listen closely to Steve Case's insightful advice."
– Brian Chesky, Co-founder and CEO, Airbnb

“An extraordinarily frank and incisive book from an extraordinary business leader. All budding entrepreneurs, and all who care about the future, should read The Third Wave and heed the lessons as well as the insights.”
—David Rubenstein, Co-founderand Co-CEO, The Carlyle Group

“What’s new and noteworthy here is Case’s effort to draw a connection between his own history and an impending era of change. Moreover, he’s particularly thoughtful on the subject of how digital innovation and existing regulatory regimes will need to work together in the coming decades. . . . There’s little doubt that Case’s insights have value.”
—Jon Gertner, The Washington Post

“Case believes the third wave, which is only just beginning, will have far more impact as the internet transforms real world sectors such as healthcare, education, transport and energy. He shows how existing technologies can be deployed far more smartly rather than assuming that we will see further heroic breakthroughs.”—Financial Times