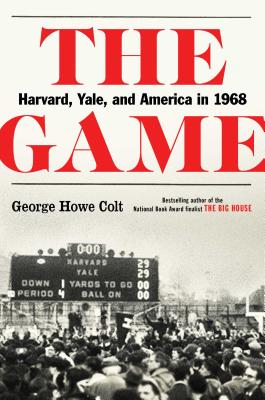 From the bestselling author of The Big House comes “a well-blended narrative packed with top-notch reporting and relevance for our own time” (The Boston Globe) about the young athletes who battled in the legendary Harvard-Yale football game of 1968 amidst the sweeping currents of one of the most transformative years in American history.

On November 23, 1968, there was a turbulent and memorable football game: the season-ending clash between Harvard and Yale. The final score was 29-29. To some of the players, it was a triumph; to others a tragedy. And to many, the reasons had as much to do with one side’s miraculous comeback in the game’s final forty-two seconds as it did with the months that preceded it, months that witnessed the assassinations of Martin Luther King and Robert F. Kennedy, police brutality at the Democratic National Convention, inner-city riots, campus takeovers, and, looming over everything, the war in Vietnam.

George Howe Colt’s The Game is the story of that iconic American year, as seen through the young men who lived it and were changed by it. One player had recently returned from Vietnam. Two were members of the radical antiwar group SDS. There was one NFL prospect who quit to devote his time to black altruism; another who went on to be Pro-Bowler Calvin Hill. There was a guard named Tommy Lee Jones, and fullback who dated a young Meryl Streep. They played side by side and together forged a moment of startling grace in the midst of the storm.

"Colt’s recounting of this significant college game also resounds with significant cultural commentary on a tumultuous period. It’s a well-blended narrative packed with top-notch reporting and even relevance for our own time."
— Boston Globe

"There's no doubt that football fans will find The Game fascinating — Colt understands the nuances of the sport, and he writes about it with an enthusiasm that never descends into rah-rah fandom. But you don't have to be a sports fan to enjoy the book; like Buzz Bissinger's Friday Night Lights, its human focus makes it accessible to everyone, even if you don't know the difference between a touchback and a touchdown. Vibrant, energetic and beautifully structured, The Game is a big-time winner."
— NPR

"Deftly weaves anecdotes from players with some of the major newsmakers in a profoundly tumultuous year.”
— Newsweek

"Successfully blends the tenor of the times into the narrative of two elite universities as they march toward their end-of-season football showdown in 1968. As the epic game approaches, the reader has come to know and be invested in so many players from both sides that one wishes there would be no winner.”
— New York Times Book Review

"A fascinating look at a famous game and a turbulent year in America."
— New York Post

"I began to read this book believing that the 1968 Harvard Yale game could not possibly represent anything more than a tiny sliver of American life—and an elite one at that. Three hundred forty-one pages later, George Howe Colt’s spirited prose and encompassing vision convinced me otherwise. The game itself is plenty of fun, of course, but it’s the narrative's nation-spanning context that kept me riveted to this book.”
— S.C. Gwynne, author of Empire of the Summer Moon and Rebel Yell

"A richly detailed, engaging story... First-rate reporting and writing that will appeal to gridiron fans and general readers as well."
— Kirkus, starred reviews

"By humanizing the players, the accounts of each team's amazing season and the four-chapter recap of their final, unbelievable game are elevated above entertaining sports reporting to thoughtful, emotional storytelling. This excellent history illustrates sport's powerful role in American society."
— Publishers Weekly

“College football fans will be drawn to the game action, but the stories of these young men and their adjustments to the 1960s will keep them reading. The game might have ended in a tie, but this book is a winner.”
— Library Journal