Trust No One: A Thriller (Paperback) 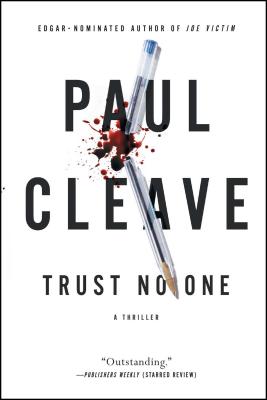 Trust No One: A Thriller (Paperback)


Special Order - Usually Arrives in 1-5 Days
In this “outstanding psychological thriller” (Publishers Weekly, starred review) by the Edgar-nominated author of Joe Victim, a famous crime writer struggles to differentiate between his own reality and the frightening plot lines he’s created for the page.

Jerry Grey is known to most of the world by his crime writing pseudonym, Henry Cutter—a name that has been keeping readers on the edge of their seats for more than a decade. Recently diagnosed with early onset Alzheimer’s at the age of forty-nine, Jerry’s crime writing days are coming to an end. His twelve books tell stories of brutal murders committed by bad men, of a world out of balance, of victims finding the darkest forms of justice. As his dementia begins to break down the wall between his life and the lives of the characters he has created, Jerry confesses his worst secret: The stories are real. He knows this because he committed the crimes. Those close to him, including the nurses at the care home where he now lives, insist that it is all in his head, that his memory is being toyed with and manipulated by his unfortunate disease. But if that were true, then why are so many bad things happening? Why are people dying?

Hailed by critics as a “masterful” (Publishers Weekly) writer who consistently offers “ferocious storytelling that makes you think and feel” (The Listener) and whose fiction evokes “Breaking Bad reworked by the Coen Brothers” (Kirkus Reviews), Paul Cleave takes us down a cleverly twisted path to determine the fine line between an author and his characters, between fact and fiction.
Paul Cleave is the internationally bestselling author of ten award-winning crime thrillers, including Joe Victim, which was a finalist for the 2014 Edgar and Barry Awards, Trust No One and Five Minutes Alone, which won consecutive Ngaio Marsh Awards in 2015 and 2016. He lives in Christchurch, New Zealand.
Praise for TRUST NO ONE:

“A gripping thriller. TRUST NO ONE draws us into a world where truth blends with delusion. This story of a writer losing his memory and bearings pulls us into a maze where fiction blurs into murder. I couldn’t put it down.”
— Meg Gardiner, Edgar Award winning author of Phantom Instinct

"With an unexpected ending, this thriller is one to remember."
— NY Journal of Books

“This powerhouse novel plays with the subtexts at the core of the mystery genre.”
— Booklist

“On almost every page, this outstanding psychological thriller forces the reader to reconsider what is real.”
— Publisher’s Weekly (starred review)

“A vivid, jangled exploration of mental illness, dark imagination, and the nowhere territory in between…. Cleave spins one nightmare scenario after another out of Jerry's homely malady, leaping with such fiendish élan between past and present tense and first-person, second-person, and third-person narration that you may wonder if you've killed someone yourself.”
— Kirkus Reviews

“This one will keep you guessing until the end.”
— The Strand Magazine

“[A] powerhouse of a tale... A gripping thriller from beginning to end.”
— Booklist (starred review)

“Cleave pulls out all the stops in his seventh Christchurch noir.... [He] juggles all the elements with impressive ease. Darkly humorous references to horrific violence will resonate with Dexter fans.”
— Publishers Weekly (starred)

“Cleave does his usual great job of threading two ongoing stories from two different serials into a single, closely knit unit and as usual, keeps the reader eager for more. It’s hard not to empathize with Joe, even cheering for the bad guy is allowed, if for no other reason, we need to know what he will do next.”
— Suspense Magazine

“Clever, compelling, and not for the faint hearted. Joe Middleton is the guiltiest 'innocent man' in crime fiction.”
— Michael Robotham, internationally bestselling author of Watching You

Praise for THE LAUGHTERHOUSE:

“An intense adrenalin rush from start to finish, I read The Laughterhouse in one sitting. It’ll have you up all night. Fantastic!”
— S.J. Watson, New York Times bestselling author of Before I Go to Sleep

“Piano wire–taut plotting, Tate’s heart-wrenching losses and forlorn hopes, and Cleave’s unusually perceptive gaze into the maw of a killer’s madness make this a standout chapter in his detective’s rocky road to redemption.”
— Publishers Weekly (starred)

“In Cleave’s third psycho-thriller, Theodore Tate is the quintessential flawed hero, a damaged soul hunting deviants in a forest of moral quandaries.... An intense and bloody noir thriller, one often descending into a violent abyss reminiscent of Thomas Harris, creator of Hannibal Lecter.”
— Kirkus Reviews

“A wonderful book.... The final effect is that tingling in the neck hairs that tells us an artist is at work.”
— Booklist (starred)

“This dark, gripping thriller, the latest in the Tate saga, is as hard-boiled as it gets. The surprise ending suspends all disbelief. Like a TV series that ends its season on a cliffhanger, you won’t want to wait until next year. This will leave the reader clamoring for the next book in the series.”
— Suspense Magazine

“Cleave is a master of evoking the view askew; delving into the troubled psyches of conflicted characters. Former cop and convict Theo Tate, stumbling forward in search of some sort of redemption, returns to the scene of his first crime scene, hunting a killer and kidnapper set on revenge. Ferocious storytelling that makes you think and feel. A blood-stained high point in Cleave’s already impressive oeuvre.”
— The Listener (New Zealand), A Best Book of 2012