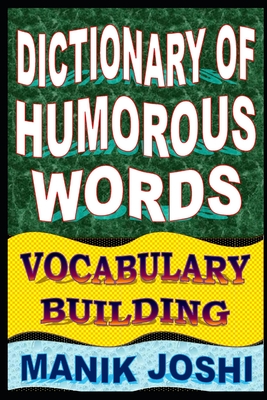 By Manik Joshi
$7.99
Usually Ships in 1-5 Days
This book cannot be returned

What is Humor? HUMOUR (British English) HUMOR (AMERICAN ENGLISH)] - Humor is something that is funny, comical, or amusing Definition of 'Humorous Words' -- Words that are intended to be amusing, entertaining, funny, or comical are called humorous words. Examples: beak noun] - large or pointed nose of somebody; ego-surfing noun] - the activity of searching your name in different websites on Internet; iron rations noun] - a small amount of food carried for emergency by soldiers, etc. while climbing or walking; unhand verb] - to release somebody that you are holding Besides "Humorous Words", there are some Idioms and Phrasal Verbs which are used to express humor (amusement or funniness) Example- (idiom): a big cheese - a very important and influential person in a big organization Example- (phrasal verb): gird (up) your loins - to get ready to do a difficult task or activity NOTE: Many 'Humorous Words' are also used in 'formal', 'informal' or other sense - Example: BEAST -- beast noun] Humorous] - a person or thing who is unpleasant; beast noun] Informal] - a thing of a particular type; beast noun] Formal] - a large and dangerous animal Detailed list of 'humorous words', parts of speech they belong to, and their meanings are as follows: Humorous Words - A-- abaya noun]- a full-length, sleeveless outer garment worn by Arabs abdicate verb]- to give up all hope of ever having a flat stomach abibliophobia noun]- the fear of running out of reading material abomasums noun]- the fourth stomach of a ruminant, such as a cow or sheep absquatulate verb]- to abruptly leave or abscond with something academe noun]- the world of studying, teaching, etc. at academic institutions e.g. universities and colleges accoutrements (accouterments) noun]- pieces of equipment that are required for an activity; accessories acerbate verb]- to embitter somebody acidulous adjective]- rather sour or sharp in speech, manner, etc. adjourn to... phrasal verb]- to go to another place to calm down of advanced years sb's advanced age idiom]- used to show that somebody is 'very old' or aged agelast noun]- one who never laughs aglet noun]- the plastic tip on the end of a shoelace alack exclamation]- used to express sadness or regret allegator noun]- someone who alleges allergic adjective]- strong dislike towards somebody amatory adjective]- relating to physical activity or desire amphibology noun]- grammatically ambiguous phrase or sentence (e.g.: he talked to his son and his daughter) amphisbaena noun]- a mythical serpent with a head at each end anencephalous adjective] - lacking a brain anfractuous adjective]- circuitous or winding anguilliform adjective]-resembling an eel anserine adjective]- goose-like silly or foolish antediluvian adjective]- traditional or out-of-date anthropophagy noun]- cannibalism apolaustic adjective]- devoted to the seeking of enjoyment apple-knocker noun] ignorant or unsophisticated person appurtenance noun]- a smaller part of something larger, superior or more significant archipelago noun]- a chain of islands argle-bargle noun]- meaningless and abundant talk or writing argus-eyed adjective]- vigilant, referring to Argos, a Greek mythological watchman with a hundred eyes argute adjective]- shrewd argy-bargy noun]- noisy arguing assignation noun]- a secret meeting with a lover autotomy noun]- the casting off of a limb or other part of the body by an animal under threat, such as a lizard avuncular adjective]- uncle-like.

Manik Joshi was born on Jan 26, 1979 at Ranikhet and is permanent resident of Haldwani, Kumaon zone of India. He is an Internet Marketer by profession. He is interested in domaining (business of buying and selling domain names), web designing (creating websites), and various online jobs (including 'self book publishing'). He is science graduate with ZBC (zoology, botany, and chemistry) subjects. He is also an MBA (with specialization in marketing). He has done three diploma courses in computer too. ManikJoshi.com is the personal website of the author.