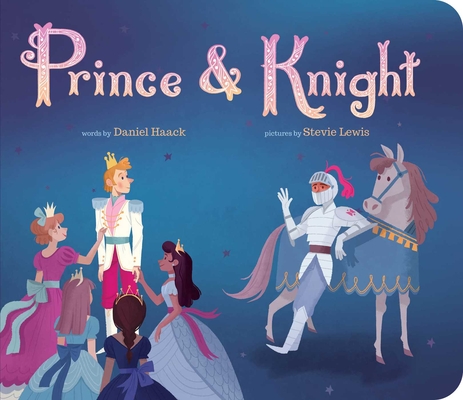 "An illuminating fairy tale for young readers to be able to see that not every prince would like to marry a princess." School Library Journal

In this modern fairy tale, a noble prince and a brave knight come together to defeat a terrible monster and in the process find true love in a most unexpected place.

"Thank you," he told his parents.

"I appreciate that you tried,

but I'm looking for something special

in a partner by my side."

Once upon a time, in a kingdom far from here, there was a prince in line to take the throne, so his parents set out to find him a kind and worthy bride. The three of them traveled the land far and wide, but the prince didn't quite find what he was looking for in the princesses they met.

While they were away, a terrible dragon threatened their land, and all the soldiers fled. The prince rushed back to save his kingdom from the perilous beast and was met by a brave knight in a suit of brightly shining armor. Together they fought the dragon and discovered that special something the prince was looking for all along. This book is published in partnership with GLAAD to accelerate LGBTQ inclusivity and acceptance.
Daniel Haack began writing at a young age, although much of his earliest work centered exclusively around his desire to be a swashbuckling hero. Like the Prince and the Knight, he just wants to save the day and get the boy, too. He has since written for various publications and collections, and Prince & Knight is his debut children's book. He graduated from Ithaca College and now works in children's educational media, for which he won a Daytime Emmy Award. Originally from Mount Horeb, Wisconsin, and formerly a New Yorker, Daniel now lives in Los Angeles, California. Find out more about Daniel at danielhaack.com.

Stevie Lewis has been living on the road for the past two years, furthering her passion for climbing, art, and the outdoors. Striving to live simply and tread lightly on the earth, she gathers inspiration from a variety of adventures, be it climbing in the high desert in central Oregon, hiking in the wilderness of Alaska, or sharing laughs with fellow travelers around a campfire. After working for four years in animation, she now illustrates children's books and creates art based on her travels. Find out more about Stevie at chocosweete.com.