Music, Theater, and Society in the Comedies of Luiz Carlos Martins Penna (1833-1846): Amidst the Lundu, The Aria, and the Alleluia (Hardcover) 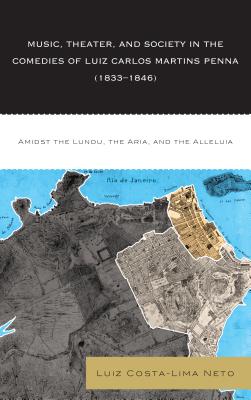 Music, Theater, and Society in the Comedies of Luiz Carlos Martins Penna (1833-1846): Amidst the Lundu, The Aria, and the Alleluia (Hardcover)

This book clarifies the musical dramaturgy of comedy writer and musician Luiz Carlos Martins Penna (1815-48) - a notion that encompasses both the theatrical text and its performance. The corpus for this analysis is composed of twelve comedies by Martins Penna written between 1833 and 1846, divided into three groups, which I have called Lundu, Aria, and Alleluia. The sound universe made ​​up by the three groups of comedies covers African-Brazilian genres and musical-choreographic styles (batuque, fado, lundu, miudinho, muquir o), the transnational urban popular universe (lundu, tirana, quadrilha, marcha, waltz, caxuxa, tonadilla, polka), and modinhas and Italian opera, in addition to romantic concertos, Gregorian chant and Iberian religious theater (loas). To evaluate the multiple meanings acquired by the musical allusions inserted into the comedy texts and theatrical performances, this research reveals the network which included the author, actors, theater owners, publishers and the public, and other agents, such as black Catholic irmandades (brotherhoods), Freemasonry, and institutions linked to the imperial government. The sound universe of the comedies of Martins Penna are compared to the comedic axes of the Western theatrical tradition (a study of situations and characters) and the axes of performance (solo and chorus), contemplating the relationship between the repertoires written by Martins Penna and the repertoires of Brazilians and Portuguese artists, a mix of actors, singers and dancers, who performed in his comedies. The research questions the notion of authorship and reveals the importance of the partnership between theatrical writers, artists and publishers, through which the comedies of Martins Penna have reached the second half of the nineteenth century through the present.
Luiz Costa-Lima Neto is lecturer in music at the Martins Penna School of Theatre.