Poor Horse on a Rich Hill: ...a true story (Paperback) 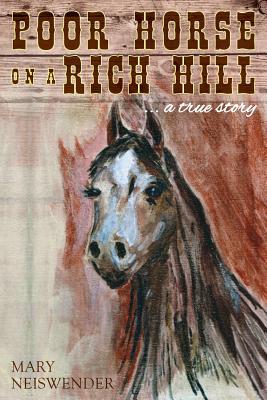 Poor Horse on a Rich Hill: ...a true story (Paperback)

Families occasionally, and unintentionally, find themselves adopting animals-a daughter brings a goldfish home from a party, a son finds a lizard in the backyard, or a stray cat stops in for a saucer of milk and never leaves. For Mary Neiswender and her family, it is a horse.

Miss Gay is as close to human as a horse can get, and like most humans, she is a pain. Many nights Mary finds herself trudging through the rain, glasses fogging, shoes squishing through the mud eroding off one of the richest Los Angeles hillsides, trying to find her wandering, one-of-a-kind horse. This big, red, one-eyed horse, with a sway back, knobby knees, and very few teeth is a disgrace to the posh neighborhood, but she quickly becomes family to the Neiswenders. The only thing they know about horses is what they've seen in western movies and television shows, but what they lack in practical knowledge, they make up for in love and compassion.

This chronicle of their hilarious adventures with Miss Gay is full of laughs and touching moments that people of all ages will enjoy. It's endearing. It's preposterous...And it's all true

Mary Neiswender is a retired newspaper investigative reporter, a two-time Pulitzer Prize nominee, and a winner of nearly every major journalistic award in California. She is most widely recognized as the only reporter with who mass killer Charles Manson would communicate before and during his trial for the murders of actress Sharon Tate and five others. Detectives also give her credit for eliciting one mass murderer's confession and sending another to San Quentin State Prison's gas chamber. Poor Horse on a Rich Hill, a hilarious true story about her one-eyed pet horse, is her third book and one that takes her far from the front lines of reporting on crime and corruption.