The Splash of a Drop (Paperback) 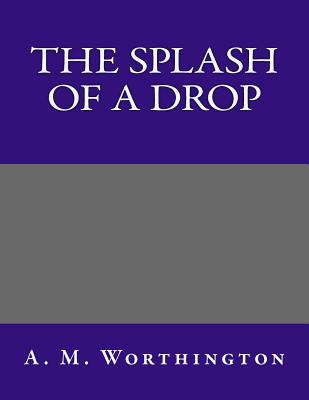 The Splash of a Drop (Paperback)

By A. M. Worthington


Availability to be confirmed
The splash of a drop is a transaction which is accomplished in the twinkling of an eye, and it may seem to some that a man who proposes to discourse on the matter for an hour must have lost all sense of proportion. If that opinion exists, I hope this evening to be able to remove it, and to convince you that we have to deal with an exquisitely regulated phenomenon, and one which very happily illustrates some of the fundamental properties of fluids. It may be mentioned also that the recent researches of Lenard in Germany and J.J. Thomson at Cambridge, on the curious development of electrical charges that accompanies certain kinds of splashes, have invested with a new interest any examination of the mechanics of the phenomenon. It is to the mechanical and not to the electrical side of the question that I shall call your attention this evening. The first well-directed and deliberate observations on the subject that I am acquainted with were made by a school-boy at Rugby some twenty years ago, and were reported by him to the Rugby Natural History Society. He had observed that the marks of accidental splashes of ink-drops that had fallen on some smoked glasses with which he was experimenting, presented an appearance not easy to account for. Drops of the same size falling from the same height had made always the same kind of mark, which, when carefully examined with a lens, showed that the smoke had been swept away in a system of minute concentric rings and fine striae. Specimens of such patterns, obtained by letting drops of mercury, alcohol, and water fall on to smoked glass, are thrown on the screen, and the main characteristics are easily recognized. Such a pattern corresponds to the footprints of the dance that has been performed on the surface, and though the drop may be lying unbroken on the plate, it has evidently been taking violent exercise, and were our vision acute enough we might observe that it was still palpitating after its exertions.