We Are All Shipwrecks: A Memoir (Hardcover) 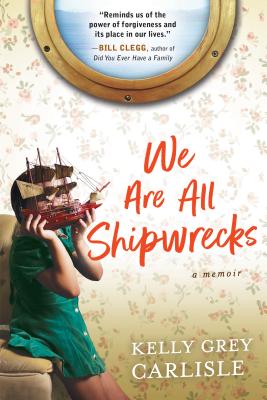 We Are All Shipwrecks: A Memoir (Hardcover)

AS SEEN ON DR. OZ

"Moving and complex, this is an exquisitely written tale of perseverance and unconditional love. A worthwhile addition to any collection."—Library Journal, STARRED Review

A mother's murder. Her daughter's redemption. And the complicated past that belongs to them both.

Kelly always knew her family was different. She knew that most children didn't live with their grandparents and that their grandparents didn't own porn stores. Her classmates didn't sleep on a boat in the L.A. harbor, and she knew their next-door neighbors probably weren't drug addicts and johns. She knew that most of her classmates knew more about their moms than their cause of death. What Kelly didn't know was if she would become part of the dysfunction that surrounded her. Would she end up selling adult videos and sinking into the depths of harbor life, or would she escape to live her own story somewhere else?

As an adult, Kelly decides to discover how the place where she came from defined the person she ultimately became. To do this, she goes back to the beginning—to a mother she never knew, a thirty-year-old cold case, and two of Los Angeles's most notorious murderers.

We Are All Shipwrecks is Kelly's story of redemption from tragedy, told with a tenderness toward her family that makes it as much about preserving the strings that anchor her as it is about breaking free.

Kelly Carlisle’s personal essays have appeared in the New England Review, Salon.com, Ploughshares, and more. She has a PhD in English from the University of Nebraska and lives with her family in Texas, where she is an assistant professor at Trinity University. Visit her on Twitter @ProfKGC.

"A stunning piece of work – a wrenching, beautiful exploration of the author’s struggle to solve the mystery of her mother’s murder." — Fourth Genre

"Moving and complex, this is an exquisitely written tale of perseverance and unconditional love." — Library Journal, STARRED review

"A turbulent childhood is accurately rendered in this gritty, raw memoir of Carlisle’s family and her search for the truth about her mother's death." — Kirkus Reviews

"Although the initial intrigue in Carlisle’s engrossing memoir is that of her mother’s murder, quite possibly by the Hillside Strangler, the real story is what came after...Carlisle writes from her current perspective, questioning the implications of a life marked by death from the start and exploring how the adults in her life...shaped who she was and who she became." — Booklist

"Rich and complex memoir... Carlisle captivates the reader in this tender, warts-and-all narrative of her attempt to unravel her mother’s murder and of the man who helped to create an adventurous, if confusing, childhood for her." — Publishers Weekly

"Every so often a book arrives that slaps you like an incoming wave. Powerful, briny and brimming with the flotsam and jetsam of an uncommon life, We Are All Shipwrecks is a dazzling debut. " — The Dallas Morning News

"Carlisle delivers an often bleak story with a kind of skillful tenderness, and in the process she explores the power and limitations of love." — Chapter 16