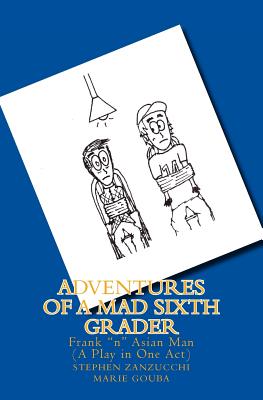 
Special Order - Usually Arrives in 1-5 Days
- This book cannot be returned
A Play in One Act This is the scripted version of the original book. Life sucks, especially if you are Frank who is a 6th grader, and a mad scientist that loves to experiment with everything. Frank's experiments usually get him into trouble, but this time he is positive his latest experiment will solve all of his problems for good. Will Frank's experiment do as predicted, or will the experiment backfire in his face? If you love producing/reading Screenplays with a crazy, adventures, wacky sense of humor, this Play is for you. This Play is perfect for middle school and high school students to preform. The Play is about 45min long. The script is complete with a list of character list, set list, properties list, and set suggestions.
About the Author: Stephen Zanzucchi has been entertaining children for years with his crazy stories. He lives in Arizona and is both a teacher and a father. When he is not writing stories, he is out exploring life's greatest adventures. Who knows what he'll come up with next? Marie Gouba is an actress, singer and educator who has been working in the theatre since she was a child. She has performed both regionally and internationally in musicals and plays, including Gods at Play, directed by the Olivier Award writing author of Martin Guerre, Stephen Clark. Marie grew up in the suburbs of Detroit, Michigan and has lived in various places since then including New England, and the United Kingdom. Currently, Marie lives in Phoenix, Arizona and is enjoying the sunshine immensely. When she is not gracing the stage or teaching young ones how to sing, she is traveling and exploring this fabulous world.