What Would Mrs. Astor Do?: The Essential Guide to the Manners and Mores of the Gilded Age (Hardcover) 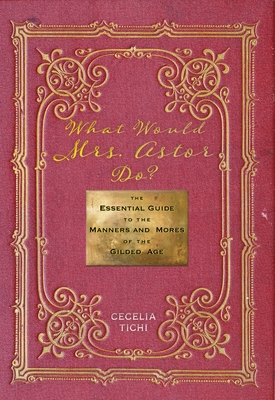 What Would Mrs. Astor Do?: The Essential Guide to the Manners and Mores of the Gilded Age (Hardcover)

Mark Twain called it the Gilded Age. Between 1870 and 1900, the United States' population doubled, accompanied by an unparalleled industrial expansion, and an explosion of wealth unlike any the world had ever seen. America was the foremost nation of the world, and New York City was its beating heart. There, the richest and most influential--Thomas Edison, J. P. Morgan, Edith Wharton, the Vanderbilts, Andrew Carnegie, and more--became icons, whose comings and goings were breathlessly reported in the papers of Joseph Pulitzer and William Randolph Hearst. It was a time of abundance, but also bitter rivalries, in work and play. The Old Money titans found themselves besieged by a vanguard of New Money interlopers eager to gain entr e into their world of formal balls, debutante parties, opera boxes, sailing regattas, and summer gatherings at Newport. Into this morass of money and desire stepped Caroline Astor.

Mrs. Astor, an Old Money heiress of the first order, became convinced that she was uniquely qualified to uphold the manners and mores of Gilded Age America. Wherever she went, Mrs. Astor made her judgments, dictating proper behavior and demeanor, men's and women's codes of dress, acceptable patterns of speech and movements of the body, and what and when to eat and drink. The ladies and gentlemen of high society took note. "What would Mrs. Astor do?" became the question every social climber sought to answer. And an invitation to her annual ball was a golden ticket into the ranks of New York's upper crust. This work serves as a guide to manners as well as an insight to Mrs. Astor's personal diary and address book, showing everything from the perfect table setting to the array of outfits the elite wore at the time. Channeling the queen of the Gilded Age herself, Cecelia Tichi paints a portrait of New York's social elite, from the schools to which they sent their children, to their lavish mansions and even their reactions to the political and personal scandals of the day.

Ceceilia Tichi invites us on a beautifully illustrated tour of the Gilded Age, transporting readers to New York at its most fashionable. A colorful tapestry of fun facts and true tales, What Would Mrs. Astor Do? presents a vivid portrait of this remarkable time of social metamorphosis, starring Caroline Astor, the ultimate gatekeeper.

Cecelia Tichi is Gertrude Conaway Vanderbilt Professor of English and American Studies Emerita at Vanderbilt University. Her books include Jazz Age Cocktails, Gilded Age Cocktails, What Would Mrs. Astor Do? The Essential Guide to the Manners and Mores of the Gilded Age and Civic Passions: Seven Who Launched Progressive America. Her mystery fiction includes the "Val and Roddy DeVere Gilded" series, set in the Gilded Age. Her website: https: //www.cecebooks.com.