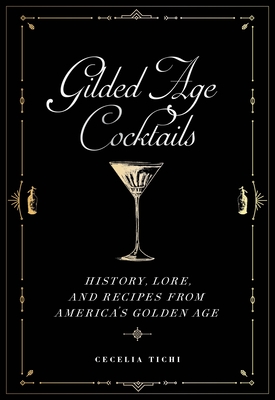 A delightful romp through America's Golden Age of Cocktails

The decades following the American Civil War burst with invention--they saw the dawn of the telephone, the motor car, electric lights, the airplane--but no innovation was more welcome than the beverage heralded as the "cocktail." The Gilded Age, as it came to be known, was the Golden Age of Cocktails, giving birth to the classic Manhattan and martini that can be ordered at any bar to this day. Scores of whiskey drinks, cooled with ice chips or cubes that chimed against the glass, proved doubly pleasing when mixed, shaken, or stirred with special flavorings, juices, and fruits. The dazzling new drinks flourished coast to coast at sporting events, luncheons, and balls, on ocean liners and yachts, in barrooms, summer resorts, hotels, railroad train club cars, and private homes. From New York to San Francisco, celebrity bartenders rose to fame, inventing drinks for exclusive universities and exotic locales. Bartenders poured their liquid secrets for dancing girls and such industry tycoons as the newspaper mogul William Randolph Hearst and the railroad king "Commodore" Cornelius Vanderbilt. Cecelia Tichi offers a tour of the cocktail hours of the Gilded Age, in which industry, innovation, and progress all take a break to enjoy the signature beverage of the age. Gilded Age Cocktails reveals the fascinating history behind each drink as well as bartenders' formerly secret recipes. Though the Gilded Age cocktail went "underground" during the Prohibition era, it launched the first of many generations whose palates thrilled to a panoply of artistically mixed drinks.
Cecelia Tichi is Gertrude Conaway Vanderbilt Professor of English and American Studies at Vanderbilt University. She is the author of nine books, including Jazz Age Cocktails, Gilded Age Cocktails, What Would Mrs. Astor Do? The Essential Guide to the Manners and Mores of the Gilded Age and Civic Passions: Seven Who Launched Progressive America.