Song of Cerannon - Lammas: A Shedding of Sacraments (Paperback) 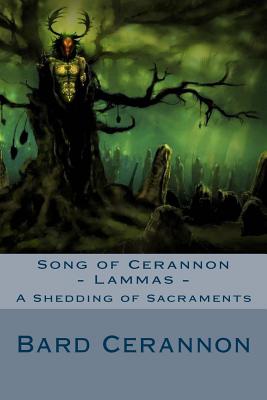 Although the wheel of the year has been described in terms of the relationship between the Goddess and her child/consort Horned God, the tellings I have seen have been superficial in the extreme. This Song is my deliberate, bardic intent to redress that deficiency, to give the story a little depth, and poignancy, and gravitas, to enhance our understanding of the motives and inter-relationships between pagan and deity. This neopagan story is one that (figuratively) would have been told by a bard, sitting in a long house, or round a fire some 2000 or so years ago. His audience would be hunters, warriors and farmers, ancient Celts, anywhere in western Europe. The two main characters are the Horned God, called Cernunnos, or Herne; and the Goddess. Herne is a manly man, a hunter, a leader, who is a god of all the wild things of the earth. He's also both the Goddess' son, and her husband. The Goddess herself may appear in several guises, and is known by many names. Here, her title and primary role is that of the M rr gan. Her name is Anann, and we would call her "Death". This then, is the story of Lammas, which is the first harvest of the year, the harvest of the grains. It is told from the point of view of the ordinary people present at a great event, and told and re-enacted to those gathered to celebrate it. The scene is a stone circle at the top of a hill ...