Phil: The Rip-Roaring (and Unauthorized!) Biography of Golf's Most Colorful Superstar (Hardcover) 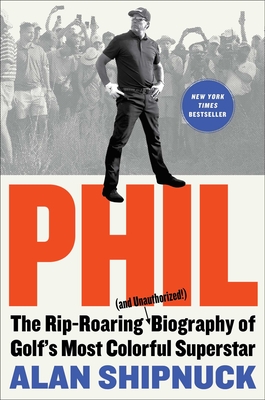 Phil: The Rip-Roaring (and Unauthorized!) Biography of Golf's Most Colorful Superstar (Hardcover)

Phil Mickelson is one of the most compelling figures in sports. For more than three decades he has been among the best golfers in the world, and his unmatched longevity was exemplified at the 2021 PGA Championship, when Mickelson, on the cusp of turning fifty-one, became the oldest player in history to win a major championship.

In this raw, uncensored, and unauthorized biography, Alan Shipnuck captures a singular life defined by thrilling victories, crushing defeats, and countless controversies. Mickelson is a multifaceted character, and all his warring impulses are on display in these pages: He is a smart-ass who built an empire on being the consummate professional; a loving husband dogged by salacious rumors; a high-stakes gambler who knows the house always wins but can’t tear himself away. Mickelson’s career and public image have been defined by the contrast with his lifelong rival, Tiger Woods. Where Woods is robotic and reticent, Mickelson is affable and extroverted, an incorrigible showman whom many fans love and some abhor because of the overwhelming size of his personality. In their early years together on Tour, Mickelson lacked Tiger’s laser focus and discipline, leading Tida Woods to call her son’s rival “the fat boy,” among other put-downs. Yet as Tiger’s career has been curtailed by scandal, addiction, and a broken body, Phil sails on, still relevant on the golf course and in the marketplace.

Phil is the perfect marriage of subject and author. Shipnuck has long been known as the most fearless writer on the golf beat, and he delivers numerous revelations, from the true scale of Mickelson’s massive gambling losses; to the inside story of the acrimonious breakup between Phil and his longtime caddie, Jim “Bones” Mackay; to the secretive backstory of the Saudi golf league that Mickelson championed to wield as leverage against the PGA Tour. But Phil also celebrates Mickelson’s random acts of kindness and generosity of spirit, to which friends and strangers alike can attest. Shipnuck has covered Mickelson for his entire career and has been on the ground at Mickelson’s most memorable triumphs and crack-ups, allowing him to take you inside the ropes with a thrilling immediacy and intimacy. The result is the juiciest and liveliest golf book in years—full of heart, humor, and unexpected turns.
Alan Shipnuck is the author of eight books, including the national bestsellers Bud, Sweat & Tees and The Swinger (with Michael Bamberger). Shipnuck has received twelve first-place awards from the Golf Writers Association of America, breaking the record of Dan Jenkins, a member of the World Golf Hall of Fame. After more than two decades at Sports Illustrated and GOLF magazine, Shipnuck is now a partner at the golf media company the Fire Pit Collective, where all his writing, podcasts, and video storytelling can be found. Shipnuck lives in Carmel, California.
“Thoroughly engaging.”
—Gene Wang, The Washington Post

“A rollicking good time . . . Who is Phil? Shipnuck presents both the good and bad and leaves it to the reader to decide where they come out in the end. . . . I suspect Phil’s fan base will find reasons anew to adore him even more while his detractors will find fresh ammo to argue that he’s one of the all-time phonies.”
—Adam Schupak, Golfweek

“Alan Shipnuck didn’t know his biography of Phil Mickelson would become the most anticipated and newsworthy release of a golf book since his 2011 collaboration with Michael Bamberger, The Swinger, a work of fiction that was a thinly disguised version of Tiger Woods. . . . The big difference is that Phil is true—difficult as it may be to believe some of the exploits, stories, and anecdotes packed into the book. . . . Shipnuck vividly tells the story of a walking, talking, shot-making contradiction.”
—Gary Smits, Florida Times-Union

“Riveting . . . When people get their hands on a book billed as a ‘rip-roaring’ account, they will be buying a rip-roaring good time celebrating and illuminating the (golf) genius Mickelson has long been. . . . The book captures the often perverse ways Mickelson always needs something to play for. Endlessly. Exhaustingly so. And the stories come almost entirely from named sources. The total package that is Shipnuck’s Phil is also combined with plenty of incredible stories of generosity, making for an entertaining read that gives golf fans a much-needed book to talk about.”
—Geoff Shackelford, The Quadrilateral

“Sports writing is often the best writing, a fact well known to those who read about sports and inconceivable to those who don’t. For a vivid reminder, look no further than this unauthorized biography. . . . Phil is well researched, bracingly written, and full of previously unreported color; Mickelson emerges as a mercurial and charismatic figure whose record-setting golf game is possibly the least interesting thing about him.”
—James Tarmy, Bloomberg Businessweek

“A robust, comprehensive, bald-faced foray into the gigantic life of a man now living in an oversized kettle of hot water. . . . Shipnuck’s nose for the truth takes the reader into some dark and disconcerting places. He provides frequent and fully anecdoted references to Mickelson’s gambling. . . . He also addresses the minefield of rumors loosely connected to Philly Mick’s personal life, unveiling stories that have circulated for more than two decades. That’s another thing about Shipnuck. He has a big pair, especially for a golf writer. And they’re both made of brass. He also has an appropriate sense of what is journalistically fair, and this book doesn’t come close to crossing the line. . . . The salacious stuff gets most of the attention, but the product in its entirety is engaging, addictive and impressive.”
—John Hawkins, Sports Illustrated

“A thoroughly readable portrait of a man who, for good and ill, shatters every stereotype of golfers as personality-deficient cyphers.”
—Bill Ott, Booklist

“For years, in all the better press tents, there’s been a debate: Is there a writer BIG enough to capture Phil? Turns out, there is. Alan on Phil! Shipnuck’s latest win is no ordinary event. It’s a major.”
—Michael Bamberger, New York Times bestselling author of Men in Green and The Second Life of Tiger Woods

“I devoured every win, wager, and ounce of Mickelson mischief in this unflinching portrayal of golf’s most complicated character. Hero? Gentleman? Jerk? Shipnuck’s masterful reporting is packed with inside information (the legal sort) that lets the reader decide. Thumbs up, indeed.”
—Tom Coyne, New York Times bestselling author of A Course Called America and A Course Called Ireland

“Alan Shipnuck has spent his whole career writing about and thinking about Phil, and that palpable fascination for his subject has fueled a superb biography. Anecdotes fly off the page, made rollicking and weighty by engaged and perceptive sources. Mickelson’s golfing genius, charisma, and foibles are tracked with a high-wire blend of irreverence and dispassion. For all of that, it’s Shipnuck’s unflinching pursuit of Phil’s complexity that will most endure.”
—Jaime Diaz, Golf Channel commentator and #1 New York Times bestselling coauthor (with Hank Haney) of The Big Miss