Watch Me: A Memoir (Hardcover) 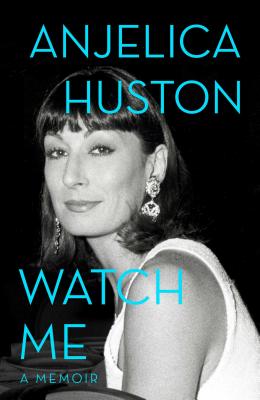 Watch Me: A Memoir (Hardcover)


Availability to be confirmed
Following her “extraordinary” (Vanity Fair), “evocative” (The New York Times), “magically beautiful” (The Boston Globe), “gorgeously written” (O, The Oprah Magazine) coming-of-age memoir, Academy Award-winning actress Anjelica Huston writes about her relationship with Jack Nicholson, her rise to stardom, her work with the greatest directors in Hollywood, her love affair with her husband, and much more.

Anjelica Huston was twenty-nine years old and trying to create a place for herself as an actress in Hollywood when the director Tony Richardson said to her: “‘Poor little you. So much talent and so little to show for it. You’re never going to do anything with your life.’ Tony had a singsong voice, like one of his own parrots, but there was no mistaking the edge. ‘Perhaps you’re right,’ I answered. Inside I was thinking, Watch me.”

In A Story Lately Told, Anjelica Huston described her enchanted childhood in Ireland and her glamorous but troubled late teens in London. That memoir of her early years ended when Anjelica stepped into Hollywood. In Watch Me, Huston tells the story of falling in love with Jack Nicholson and her adventurous, turbulent, high-profile, spirited seventeen-year relationship with him and his intoxicating circle of friends. She writes about learning the art and craft of acting, about her Academy Award-winning portrayal of Maerose Prizzi in Prizzi’s Honor, about her roles as Morticia Addams in the Addams Family films, Etheline Tenenbaum in The Royal Tenenbaums and Lilly Dillon in The Grifters, and about her collaborations with many great directors, including Woody Allen, Wes Anderson, Bob Rafelson, Francis Ford Coppola, and Stephen Frears. She movingly and beautifully writes about the death of her father, the legendary director John Huston, and her marriage to sculptor Robert Graham. She is candid, mischievous, warm, passionate, funny, and a superb storyteller.
Academy Award-winning actress and director Anjelica Huston has received honors from the National Society of Film Critics; the Independent Spirit Awards; and the Golden Globe Awards; as well as multiple Oscar, BAFTA, and Emmy awards or nominations. Huston most recently starred on the hit TV show Smash. She is the author of the memoirs A Story Lately Told and Watch Me.
“If anyone doubted Anjelica Huston’s ability to produce another captivating memoir, Watch Me will set them straight… Here, Huston delivers the goods… Winking at the past through the lens of time, Huston gamely drops her mysterious veneer to reveal a vulnerable girl with a perpetually breaking heart… Huston’s tireless fascination with the world is thrilling: She never gets bored, and neither do we.”
— Keziah Weir, Elle

“Elegant and entertaining… What makes the book rewarding is the sheer grace of Huston’s prose. I can't think of another book by an actor that has the stylistic felicity of this one.”
— Tom Moran, Chicago Tribune

“Readers will come away from Watch Me with admiration… Her new memoir is just juicy enough to satisfy gossip lovers. And yet there's an appealing reticence about Huston, a withholding that jibes with her regal bearing.”
— Jocelyn McClurg, USA Today

“Huston’s fascinating life, superb storytelling skills, and generous heart are a winning blend that makes this book hard to put down. This memoir with both substance and flair is a must-read for Huston fans, those who enjoy film, and anyone who wishes to be entertained by a richly textured life well presented.”
— Library Journal, starred review

“From a lady so simultaneously real, tough, vulnerable, privileged, and candid, I want to hear whatever she wants to tell me, up to and including a description of every designer dress she ever wore.”
— Lisa Schwarzbaum, The New York Times Book Review

“Intelligent and wryly humorous… Huston shows us all how to keep life in perspective—even when it comes to skin cancer and the scars she had to hide on her nose in order to be able to work as an actress.”
— Leigh Newman, O, The Oprah Magazine