The Range Bucket List: The Golf Adventure of a Lifetime (Paperback) 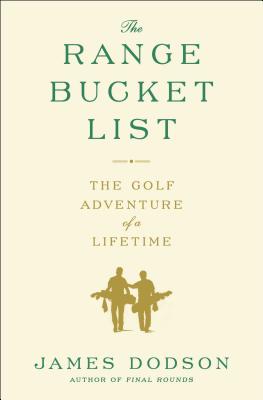 The Range Bucket List: The Golf Adventure of a Lifetime (Paperback)

Many years ago, when James Dodson was thirteen years old, he wrote a list titled “Things to Do in Golf.” It included the golfing aspirations of a young boy who had no idea where life would take him. A few years ago, now in his sixties and one of the most respected golf writers of all time, Dodson rediscovered the piece of paper in an old trunk. Realizing that he had yet to achieve many of his thirteen-year-old dreams, and pondering the things he’d add to the list if he wrote it today, he expanded the list into a golfing “bucket list” of the people and places he had yet to meet and see in the golf world.

In this tribute to the game he loves, Dodson takes readers on a journey around the world and into the lives of characters large and small. From an interesting lunch with Donald Trump to rounds with John Updike and intimate conversations with Arnold Palmer, from scoring a memorable thirteen on a hole at St. Andrews to revealing the real reason The Masters has always been broadcast on CBS, The Range Bucket List is simultaneously an exhilarating armchair adventure and one man’s love letter to a game that has fundamentally shaped him and his life, filled with unforgettable characters, untold history, and lots of heart.
James Dodson is a two-time winner of the United States Golf Association’s Herbert Warren Wind Award for best golf book of the year. He is the author of ten books, including The Range Bucket List, Final Rounds, American Triumvirate, A Golfer’s Life (with Arnold Palmer), and Ben Hogan: An American Life. He lives with his wife in North Carolina.
Praise for the books of James Dodson

“If you have been away from the game for any time, a year perhaps, or a day, Dodson’s reflections on his life in golf will make you want to get out on the course immediately. He casts a spell from which you won’t want to be released, and to which you will return, time and time again.”
—Lorne Rubenstein, author of Moe & Me and A Season in Dornich

“Fascinating . . . A stroke of singular good fortune both for golf and for people who like to read about it . . . Dodson’s book evokes an era when golf was more vivid and less corporate than it seems now.”
—Charles McGrath, The New York Times Book Review

“Sheer pleasure . . . Dodson reconstructs the great moments of the champion’s career with brilliant drama and clarity.”
—The Chicago Tribune

“A beautiful, deeply moving tribute to the love between father and son and their shared passion for golf. I have never read a more eloquent book about golf as a game where hearts can meet.”
—Michael Murphy, author of Golf in the Kingdom