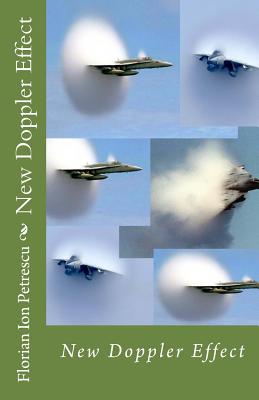 The Doppler effect (or Doppler shift), named after Austrian physicist Christian Doppler who proposed it in 1842 in Prague, is the change in frequency of a wave for an observer moving relative to the source of the wave. It is commonly heard when a vehicle sounding a siren or horn approaches, passes, and recedes from an observer. The received frequency is higher (compared to the emitted frequency) during the approach, it is identical at the instant of passing by, and it is lower during the recession. The relative changes in frequency can be explained as follows. When the source of the waves is moving toward the observer, each successive wave crest is emitted from a position closer to the observer than the previous wave. Therefore each wave takes slightly less time to reach the observer than the previous wave. Therefore the time between the arrival of successive wave crests at the observer is reduced, causing an increase in the frequency. While they are travelling, the distance between successive wave fronts is reduced; so the waves "bunch together". Conversely, if the source of waves is moving away from the observer, each wave is emitted from a position farther from the observer than the previous wave, so the arrival time between successive waves is increased, reducing the frequency. The distance between successive wave fronts is increased, so the waves "spread out". For waves that propagate in a medium, such as sound waves, the velocity of the observer and of the source is relative to the medium in which the waves are transmitted. The total Doppler Effect may therefore result from motion of the source, motion of the observer, or motion of the medium. Each of these effects is analyzed separately. For waves which do not require a medium, such as light or gravity in general relativity, only the relative difference in velocity between the observer and the source needs to be considered. The Doppler Effect 1-3] represents the frequency variation of the waves, received by an observer which is drawing (coming), respectively it's removing (going), from a wave spring (source). If a bright spring is drawing to an observer, the frequency of waves received by the observer is bigger than the emitted frequency of source, such that the respective spectral lines are moving to violet. On the contrary, if the light source is removing from the observer, the spectral lines are moving to red. One proposes to study the Doppler Effect for the light waves, generally for the electromagnetic waves.