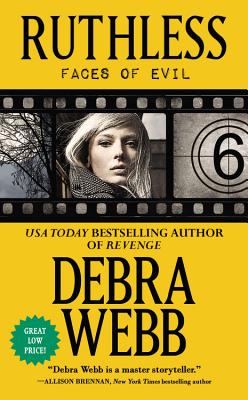 This is book number 6 in the Faces of Evil series.

Three photos of three unknown women. Sent to Deputy Chief Jess Harris by the Player, one of the world's most sadistic killers. The Player is taunting her, and Jess is more than ready to take on his challenge. Only one thing could distract her from the Player's deadly game: the appearance of a clue to long-unsolved cases. For years Birmingham's children were vanishing-one per year, always on a full moon-until the disappearances stopped and the Man in the Moon case went cold. No leads on the children were ever found-until now.

Jess has no choice but to pursue the case. Someone is reaching out to her, sending her mementos of the missing children, and the citizens of Birmingham deserve justice. But after years of silence, has the Man in the Moon really resurfaced? Or is he just another pawn in the Player's game?

"Just when you think Debra Webb can't get any better, she does. OBSESSION is her best work yet. This gritty, edge of your seat, white knuckle thriller is peopled with tough, credible characters and a brilliant plot that will keep you guessing until the very end. Move over Jack Reacher - Jess Harris is comin' to town." -- Cindy Gerard, New York Times best-selling author, award winning author of the Black Ops, Inc. series