Abundance: The Future Is Better Than You Think (Compact Disc) 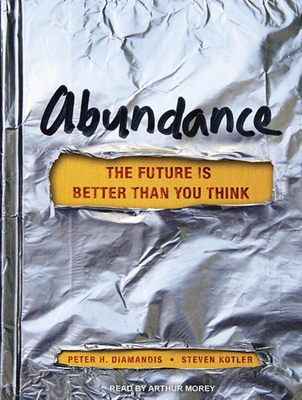 We will soon be able to meet and exceed the basic needs of every man, woman, and child on the planet. Abundance for all is within our grasp. This bold, contrarian view, backed up by exhaustive research, introduces our near-term future, where exponentially growing technologies and three other powerful forces are conspiring to better the lives of billions of people. This book is an antidote to pessimism by tech-entrepreneur-turned-philanthropist Peter H. Diamandis and award-winning science writer Steven Kotler. Since the dawn of humanity, a privileged few have lived in stark contrast to the hardscrabble majority. Conventional wisdom says this gap cannot be closed. But it is closing-fast. The authors document how four forces-exponential technologies, the DIY innovator, the Technophilanthropist, and the Rising Billion-are conspiring to solve our biggest problems. Abundance establishes hard targets for change and lays out a strategic road map for governments, industry, and entrepreneurs, giving us plenty of reason for optimism.Examining human need by category-water, food, energy, health care, education, and freedom-Diamandis and Kotler introduce dozens of innovators making great strides in each area: Larry Page, Steven Hawking, Dean Kamen, Daniel Kahneman, Elon Musk, Bill Joy, Stewart Brand, Jeff Skoll, Ray Kurzweil, Ratan Tata, Craig Venter, and many, many others.

Peter H. Diamandis is the chairman and CEO of the X PRIZE Foundation, cofounder and chairman of Singularity University, and the founder of more than a dozen high-tech companies. Steven Kotler is the author of the bestselling novel "The Angle Quickest for Flight" and the nonfiction work "West of Jesus," a 2006 PEN West finalist. He also writes "The Playing Field," a blog about the science of sport, for PsychologyToday.com.

Arthur Morey has recorded over two hundred audiobooks in history, fiction, science, business, and religion, earning a number of "AudioFile" Earphones Awards and two Audie Award nominations. His plays and songs have been produced in New York, Chicago, and Milan, where he has also performed.

"This engaging book is a needed corrective, a whirlwind tour of the latest developments in health care, agriculture, energy, and other fields as well as an introduction to thinkers and innovators such as Daniel Kahneman, Ray Kurzweil, and Craig Ventor." ---Publishers Weekly