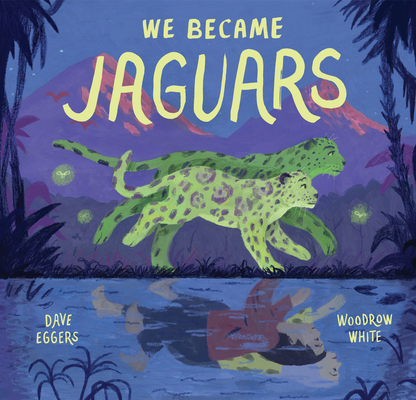 
On Our Shelves Now
Revel in the breathtaking fantasticality of We Became Jaguars—a picture book from bestselling author Dave Eggers.

When Grandma comes to visit and a young boy's parents leave, the rules of the house—and the world—change: grandson and grandmother transform into jaguars! Readers follow their journey into the undiscovered world of nature, experience true freedom, and lose themselves in an exhilarating adventure. After a day of playing, running, and climbing through sumptuous landscapes, the ending will leave you wondering what's real and what's imagined.

• A captivating, unusual story about a child and his grandmother
• Full of lush illustrations of the natural world
• Celebrates the power of love and storytelling

Breathtaking and bold, We Became Jaguars is sure to give readers beautiful dreams.

• Children's books for kids age 5–8
• Perfect for fans of Dave Eggers
• Great for environmentally conscious families
Dave Eggers is the author of many books, including Tomorrow Most Likely and Captain and the Glory. He is the cofounder of Voice of Witness, 826 National, and ScholarMatch, which connects donors and under-resourced students to make college possible. He lives in the San Francisco Bay Area.

Woodrow White is a painter based in Los Angeles, CA. He utilizes monsters, movies, and the practice of make-believe in his work to explore the layers of the human psyche.
“Clever.”-The Wall Street Journal

"Transfixing painterly illustrations offer nocturnal purples and blues along with bioluminescent pinks and greens, creating a woozy, otherworldly habitat. . . . Young people will find humor in the child's narration . . . The phrase "we jaguared on" repeats again and again as they cross varying landscapes, and it perfectly captures the fluidity of jaguar movement in its languid articulation. Children will relish this book's blurred ambiguities; what's real and what's imagined are as hard to distinguish as a jaguar in the shadows. A fresh inversion of expectations told in vivid art and idiom."-Kirkus Reviews, starred review

"[The] playfulness isn't restricted to language. White's illustrations are spirited and clever . . . [and] sumptuously depicted. . . . White's color palette is beautiful. . . . [S]o fantastic it feels real, or so real that it feels fantastic? A must-have tale about the power of imagination."-School Library Journal, starred review

"Eggers' straightforward text is enlivened by simile: a lake looks like silver and tastes like moonlight and is further enhanced by White's lushly colorful illustrations. But do the two humans really become jaguars? Careful readers will find visual clues but no matter; what's really important is the book's lively celebration of imagination."-Booklist

"The vivid concept that a grandmother's visit delivers danger and freedom instead of cozy reassurance is a winner, and Eggers (Most of the Better Natural Things in the World) develops it with easy humor and jaguar-speed pacing."-Publishers Weekly, starred review

"[T]hrilling. . . [Ex]pressive [and] full of emotional resonance and adventure, [We Became Jaguars] captures the feeling of complete immersion in a game of make-believe. And, if you're a grandparent, it may give you some ideas."-The Wall Street Journal

"[We Became Jaguars is] a wondrous, breathtakingly painted night of bonding and adventure."-The New York Times