The Heart Has Its Reasons: A Novel (Hardcover) 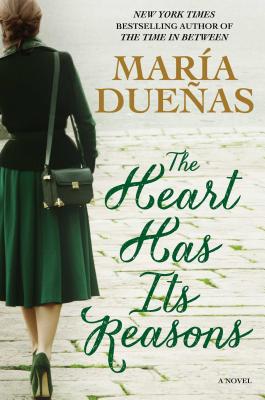 The Heart Has Its Reasons: A Novel (Hardcover)

“Blanca Perea is a college professor in Madrid. Her life seems perfect -- she is successful and happy, with a husband and two grown sons. When her husband announces that he is in love with another woman and is leaving her, Blanca's perfect world is shattered. Desperate, she flees Madrid and takes a position at a university near San Francisco. It is her job to probe into the history of a long-deceased writer and former professor, Andres Fontana. As Blanca immerses herself in Fontana's life, she becomes captivated by the things that drove him -- his ambitions, his relationships, and his ill-fated lost love. As she untangles hidden agendas and lies, Blanca finds a strength that enables her to pursue a new life with new possibilities.”
— Nancy Nelson, Sunriver Books, Sunriver, OR

Declared “a writer to watch” (Publishers Weekly, starred review), New York Times bestselling author María Dueñas pours heart and soul into this story of a woman who discovers the power of second chances.

A talented college professor in Madrid, Blanca Perea seems to have it all. But her world is suddenly shattered when her husband of twenty years leaves her for another woman. Questioning the life she once had and whether she truly knows herself, Blanca resolves to change her surroundings. She accepts what looks like a boring research grant in California involving an exiled Spanish writer who died decades ago. Anxious to leave her own troubled life behind, she is gradually drawn into his haunted world, with its poignant loves and unfulfilled ambitions.

But in delving into the past, Blanca finds herself simultaneously awakened to the present by Daniel Carter, a charismatic professor with crucial knowledge about the dead writer that he has never before revealed. Amid this web of passion, conflict, and hidden feelings, including her own, Blanca advances like an avid detective, refusing to quit, and ultimately discovers startling answers that resonate deeply in her own life.

Evocative, lyrical, and humorous, The Heart Has Its Reasons is a journey of the soul from the pangs of the past to the vibrant present. It is a story about the thrill of creating one’s life anew.
María Dueñas holds a PhD in English philology. After two decades in academia, she broke onto the literary scene in 2009 with the publication of the New York Times bestselling novel The Time in Between, followed by The Heart Has Its Reasons in 2012. Both novels became international bestsellers and have been translated into thirty-five languages. The television adaptation of The Time in Between earned critical and international acclaim. The Vineyard is her third novel.
“Duenas’s novel is brilliantly executed, and it moves expertly between decades as it reveals truths of history and of humanity.”

“A satisfying story of a woman who comes to terms with her past by investigating someone else’s.”

“Dueñas more than lives up to her title as one of the best contemporary authors today.”

“In vivid moving prose, María Dueñas tells a story that is highly entertaining.”

“A story you will not want to put down.”

“Dueñas’s second novel is able maintain the same pitch of urgency as The Time in Between.”

“Once again Dueñas has created a book that makes you forget the world for a few days.”

"An exploration of grief, loss, and recovery; of growing up and growing onward, of heart and home."
— Miss Em Recommends, Blog Review

"I highly recommend The Heart Has Its Reasons for anyone who might want a deeper understanding and appreciation for Spanish culture. This novel reminds us that there is always hope even when we feel at our lowest and life is always about moving forward.”
— The Book Binder’s Daughter, Blog review