Soldier Girls: The Battles of Three Women at Home and at War (Hardcover) 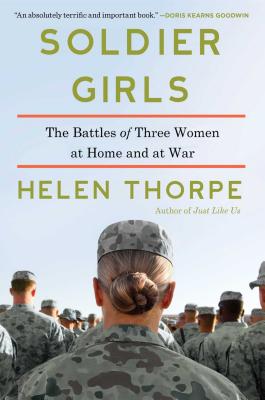 By Helen Thorpe
$28.00
Availability to be confirmed

From an award-winning, “meticulously observant” (The New Yorker), and “masterful” (Booklist) writer comes a groundbreaking account of three women deployed to Afghanistan and Iraq, and how their military service affected their friendship, their personal lives, and their families.

America has been continuously at war since the fall of 2001. This has been a matter of bitter political debate, of course, but what is uncontestable is that a sizeable percentage of American soldiers sent overseas in this era have been women. The experience in the American military is, it’s safe to say, quite different from that of men. Surrounded and far outnumbered by men, imbedded in a male culture, looked upon as both alien and desirable, women have experiences of special interest.

In Soldier Girls, Helen Thorpe follows the lives of three women over twelve years on their paths to the military, overseas to combat, and back home…and then overseas again for two of them. These women, who are quite different in every way, become friends, and we watch their interaction and also what happens when they are separated. We see their families, their lovers, their spouses, their children. We see them work extremely hard, deal with the attentions of men on base and in war zones, and struggle to stay connected to their families back home. We see some of them drink too much, have illicit affairs, and react to the deaths of fellow soldiers. And we see what happens to one of them when the truck she is driving hits an explosive in the road, blowing it up. She survives, but her life may never be the same again.

Helen Thorpe was born in London to Irish parents and grew up in New Jersey. Her journalism has appeared in The New York Times Magazine, New York magazine, The New Yorker, Slate, and Harper’s Bazaar. Her radio stories have aired on This American Life and Sound Print. She is the author of Just Like Us, Soldier Girls, and The Newcomers and lives in Denver.

"A breakthrough work... What Thorpe accomplishes in SOLDIER GIRLS is something far greater than describing the experience of women in the military. The book is a solid chunk of American history -- detailing the culture's failing, resilience and progress... Thorpe triumphs."
— The New York Times Book Review

"In the tradition of Adrian Nicole LeBlanc, Richard Rhodes, and other masters of literary journalism, SOLDIER GIRLS is utterly absorbing, gorgeously written, and unforgettable."
— Boston Globe

“With a novelist’s perception of character, drama, and telling detail, Helen Thorpe magically weaves together the stories of three very different but equally compelling women soldiers. Taken together, their stories provide an intimate window on life in the military, the impact of war, and the difficult transition to home. This is an absolutely terrific and important work.”
— Doris Kearns Goodwin

"A dynamic understanding of what it’s been like for Guard members who unexpectedly found themselves shipped off to the front lines of the wars in Afghanistan and Iraq... highly complex matters are all made palpably real through the prism of this book’s three heroines’ lives."
— The New York Times

"A nuanced look at the lives of female soliders that is as intimate as it is groundbreaking."
— O Magazine

"Thorpe follows three women, tracking their ups and downs withfaithful detail in a brilliant tableau of their overlapping lives for 12 yearsas they do multiple tours in Afghanistan and Iraq and readjust to civilianlife...Soldier Girls raises important questions about how men and women serve together and thedifferences in how they experience war, enabling us to see the subtle challengesfemale soldiers face — the hardships that don’t make easy headlines."
— The Washington Post

"A vivid and intensely personal account of the lives of three women whose only common denominator had been that they joined the Indiana National Guard never imagining they might end up in a war zone... Thorpe's matter-of-fact tone and clear and concise prose make the book all the more riveting... a captivating read, an important book and a stunning accomplishment."
— Lorraine Dusky, Military History magazine

“A raw, intimate look at the impact of combat and the healing power of friendship.”
— People magazine

"A thoughtful, fascinating and often heartbreaking account... Thorpe manages to burrow deeply into the lives of these women...incredibly intimate."
— Miami Herald

"Tracking a trio in an Indiana battalion, Thorpe movingly captures how unexpected deployments rocked women's lives... she unravels the women's complex relations--and how they sustain one another."
— Elle Magazine

"Heart-breaking... absorbing, funny... a cry worth attending, sounded by a band of sisters put in harm's way."
— Newsday

"Moving... Highlighting how profoundly military service changed their lives--and the lives of their families--this visceral narrative illuminates the role of women in the military, the burdens placed on the National Guard, and the disproportionate burden of these wars borne by the poor."
— Publishers Weekly, STARRED review

"Laudable for its clear focus on individuals and their idiosyncratic life stories... Soldier Girls is a worthy addition to the literature of our most recent wars.The three women at the heart of Thorpe’s story share a tender, familial bond that, like so much else in war literature, is generally ascribed to men... an eloquent reminder of how women’s experiences are transforming military lore."
— Bookforum

"Thorpe fills this gripping tale with the women’s own words, texts, and letters (from friends and their children, as well), and the story is engrossing and heartbreaking at once."
— Booklist