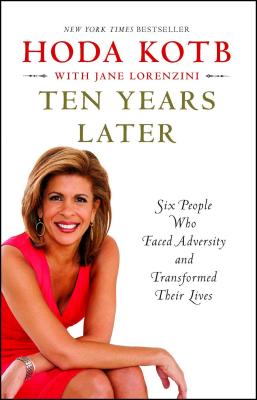 
Availability to be confirmed
Now a New York Times bestseller, in Ten Years Later, Today show coanchor Hoda Kotb tells the incredible stories of people who, when faced with impossibly challenging or tragic life situations, persevere—and even thrive—and asks, What if you, facing a game-changing event or decision right now, could see ten years into the future?

New York Times bestselling author Hoda Kotb examines game-changing moments experienced by six different people—then revisits those people a decade later. From a mother of two who struggles with an abusive relationship, to a civilian hero of 9/11 who suffers tremendous personal loss in the wake of the terrorist attacks: the harrowing obstacles they faced shook them to their core, but each of these people found the strength to take the first step in a journey that changed their lives for the better. In these beautiful, astonishing, and life-affirming stories, Hoda reveals how adversity can unleash our best qualities: resilience, perseverance, gratitude, empathy, and creativity. This book will show you how to believe in the future, no matter how dark the present, and inspire you to take the first step in your own journey of personal growth.
Hoda Kotb was named co-anchor of the fourth hour of Today in 2007. She has also been a Dateline NBC correspondent since 1998 and is a New York Times bestselling author for her book, Hoda. The three-time Emmy winner also won the prestigious 2006 Peabody Award, the 2003 Gracie Award, and the 2002 Edward R. Murrow Award. Her most recent book is Where We Belong, and she resides in New York City.

“The book is filled with these great and wonderful reminders of the capacity of a human being to overcome incredible adversity…A great, great, great reminder of a great country and a great people, and [Hoda] is one of them."
-Mike Huckabee

"Ten Years Later: Six People Who Faced Adversity and Transformed Their Lives, stands out as a wrenching, heartfelt inspiration to better yourself in 2013….These stories could easily tip over into maudlin territory, but Kotb’s journalistic skills and her co-author and pal Jane Lorenzini’s voice keep the tone smart and gripping.”