Island of Fire (The Unwanteds #3) (Paperback) 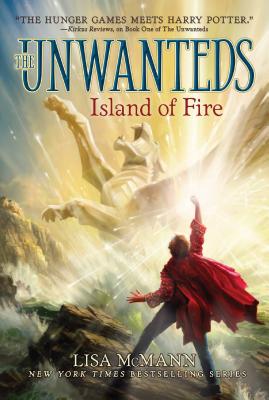 Island of Fire (The Unwanteds #3) (Paperback)

This is book number 3 in the The Unwanteds series.

The fate of Artimé is at stake—and an unlikely alliance could redeem it—in book three in the New York Times bestselling Unwanteds series.

The magical world of Artimé is gone. The Unwanteds have no food, no water, and no hope. And everyone is looking to Alex Stowe for answers.

Overwhelmed and feeling totally helpless, Alex knows it’s up to him to find a way to restore Artimé, rescue his captive friends, and free Megan from her voice-stealing necklace of thorns—three impossible tasks. But could help lie with the silent, orange-eyed newcomers?

Meanwhile, in the stark land of Quill, Alex’s twin brother Aaron continues to build his army, preparing for the ultimate showdown with the Unwanteds. But a shocking twist reveals that Alex and Aaron share a common enemy more dangerous than either could have imagined...
Lisa McMann lives in Arizona. She is married to fellow writer and musician, Matt McMann, and they have two adult children. Her son is an artist named Kilian McMann and her daughter is an actor, Kennedy McMann. Lisa is the New York Times bestselling author of over two dozen books for young adults and children. So far she has written in genres including paranormal, realistic, dystopian, and fantasy. Some of her most well-known books are The Unwanteds series for middle grade readers and the Wake trilogy for young adults. Check out Lisa's website at LisaMcMann.com, learn more about The Unwanteds Series at UnwantedsSeries.com, and be sure to say hi on Instagram or Twitter (@Lisa_McMann), or Facebook (Facebook.com/McMannFan).