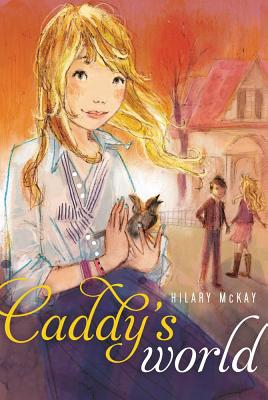 Get to know the Casson family in this effervescent novel that “strikes a lovely balance between humor and poignancy” (Publishers Weekly, starred review).

Cadmium Casson is twelve years old the summer that everything changes. Not only are her closest friendships in jeopardy, but her mom is expecting a baby. And when the baby arrives early, Caddy’s world turns upside down. Her mother spends all her time at the hospital, and her father takes over the household, which of course turns into one chaotic (though hilarious) crisis after the next.

When her charmingly dense boyfriend dumps her, Caddy is at her wits’ end. Then she discovers that the fragile baby she is so afraid of losing is not an ending, but a beginning for her whole family. And that love and friendship don’t need to be destroyed by change—they can be strengthened. Another refreshingly wise, funny, and poignant novel from the inimitable Hilary McKay.

* "In this sixth outing the family sparkles as brightly as ever. . . . With effervescent characters and dialogue, this welcome addition to the Casson saga again strikes a lovely balance between humor and poignancy."--Publishers Weekly, *STAR

"Readers new to the Casson family series will be immediately pulled in . . . In this, book six in the series, McKay proves Tolstoy wrong. Not all happy families are alike."--The Horn Book

* "The Cassons are back. Huzzah! . . . Charming and thoughtful, as well as funny and touching, this is another delightful time with the Cassons and their friends, all of whom are well worth knowing."--School Library Journal, *STARRED

"Fans of the Casson family, rejoice; McKay is returning to the headlong, madcap, and fiercely poignant crew to chronicle the earlier days of the clan. . . . The novel will be open and inviting to new readers as well, and the strong focus on Caddy’s set of friends, who aren’t featured in the other books, puts all readers on an equal footing and provides a school-and-friend story with appeal to followers of Frances O’Roark Dowell and the like."--Bulletin of the Center for Children's Books

* "McKay’s writing is like the Cassons themselves: unpredictable, touchingly human, and alternatingly mad fun and tender. New readers will be thrilled to find there are more Casson family upheavals ahead, and old fans will be delighted to learn how it all began."--Booklist, *STAR